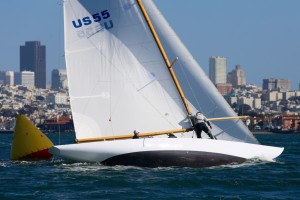 The last six meter designed by Clinton Crane, and arguably his best.   Lucie was built to the second iteration of the International 6 Metre Rule.   She was built for the noted sportsman Briggs Cunningham, and named after his first wife, Lynn (Lucie) Bedford Cunningham Warren. Lucie was named to three successive British-American Cup teams, her last in 1936.   She is the only Crane design to stay in major competition after WWII. Mr Cunningham also won the America’s Cup in 1958 on the 12-Metre Columbia. Placed 6th of 45 boats at the World Cup to win both the KSSS trophy (highest placing Rule 1 or 2 boat) and the Baum + Koneig trophy, awarded to the highest placing boat with a wood mast and Dacron sails.

Brest: the world’s largest maritime festival in photographs by Nigel Pert & Dan Houston with a … END_OF_DOCUMENT_TOKEN_TO_BE_REPLACED