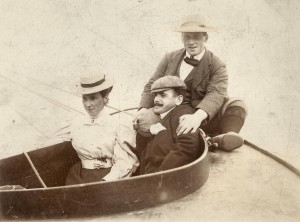 It was under the guidance of GL Watson that Alfred Mylne was fortunate enough to get the training required to become a first class designer. By 1897 he left to set up his own office and in 1911 Mylne set up his own yard on the Isle Of Bute at Port Bannatyne and named it Bute Slip Dock. The management was handed to his brother Charles.
Mylnes’ big break came in 1921 as a member of a team of experts entitled to modify the sail plan of George VI’s yacht Britannia. This certainly confirmed him as one of the great yacht designers of his time. At the height of his fame and at the age of 64 he designed the 32-metre gaff ketch, Thendara for the experienced Scottish yachtsman, Sir Arthur Young.

Brest: the world’s largest maritime festival in photographs by Nigel Pert & Dan Houston with a … END_OF_DOCUMENT_TOKEN_TO_BE_REPLACED