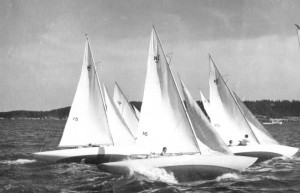 Alfred Edward Luders Jr, known as Bill, blended an avocation, racing sailboats, with his vocation as director of Luders Marine Construction Company in Stamford Harbor, a major builder of custom yachts. The firm was founded by his father in 1908 and was closed by Bill Luders sixty years later. The craftsmanship of wooden boat construction had been made obsolete by fiberglass, a material that held no interest for Luders.

He was an innovator in the use of molded plywood for hull construction of boats like the popular Luders 16 racing sailboat. More than 200 of these were built after World War II, with fleets established from Bermuda to San Francisco.

In the early nineteen thirties, the Fishers Island Yacht Club was casting about for a class to use for the junior sailors. A. E. Luders, Sr. and Jr. were chosen to design and build this new one-design class. The “Luders Gang” was well known as active racers and innovative designers of racing boats and decided that rather than produce a “chunky little boat” similar to many others used by juniors, they would design a miniature version of the then modern International Rule Sloop (such as the Six Meter). The Luders 16 was born. About fifteen L16s were built in 1934, and they were raced at Fishers Island until a hurricane decimated the fleet later in the decade. The surviving boats scattered, but interest in the class grew as more and more people saw the sleek little boats.

During World War II and the Korean War, Mr. Luders supervised the building of 100 ships for the Navy, including subchasers, minesweepers and harbor tugs.

When it came to racing, Mr. Luders’ early successes came in the International 6-Metre class of his own design and equipped on tight budgets imposed by his father. “Briggs Cunningham was kind,” Mr. Luders said of a well-financed competitor. “He would give me his discarded mainsails and jibs.”

Mr. Luders was the last survivor among five distinguished skippers in the 1950s who made the International One-Design fleet on western Long Island Sound as competitive a racing class as any. The others were George Hinman, Arthur Knapp, Emil “Bus” Mosbacher and Cornelius Shields.

When the America’s Cup competition was revived in 1958 in 12-Metre yachts, Mr. Luders built Weatherly to the design of Philip Rhodes, and Arthur Knapp campaigned her during the trails to choose a cup defender. Weatherly was not selected that year, but after a redesign by Mr. Luders, and with Mosbacher as skipper, she defended the cup in 1962.

Mr. Luders designed and built other 12-Metre yachts, the most notable being American Eagle, which Ted Turner turned into an ocean racer.

Ocean or distance racing had no appeal to Mr. Luders. “I like to sleep in a bed, preferably ashore,” he said.

The last racing yachts designed and built by Mr. Luders were the 5.5-Metre sloops, a class used in Olympic and international competition.

Brest: the world’s largest maritime festival in photographs by Nigel Pert & Dan Houston with a … END_OF_DOCUMENT_TOKEN_TO_BE_REPLACED