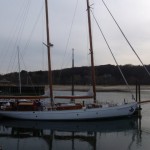 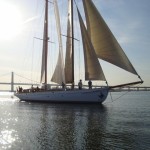 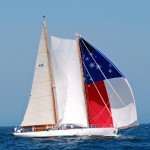 Launched as the Queen Tyi she was built for a Wall Street banker who lost the vessel in the Market Crash of 1929. Renamed Sea Gypsy, she was to become a well known schooner yacht, racing and cruising the waters of New England and serving her country during the Second World War as part of the Coastal Picket Patrol with her designation CGR-1989. As the noted historian Samuel Eliot Morison wrote, “( these vessels) had the arduous task of patrolling areas around Nantucket Shoals, west to Shinnecock and down to 40 degrees North…They kept at sea for a week of more and took everything that old man Neptune uncorked.”

She was part of the development of the classic yachting movement that began in the late 1960’s as older vessels were joined by newly built replicas as evident in a 1967 New York Times article with the by-line “Block Island waters to drip with nostalgia June 28 as schooners compete” about a gathering of schooners as part of the Storm Trysail club’s recently created Block Island Race Week. By the 1980’s she was chartering in the Mediterranean and her classic gaff rig was converted to that of a staysail schooner.

She had several refits during her career as a charter vessel, but her lifespan was nearing its end when she was purchased in Spain in 2006 and transported to Palm Beach Florida where a massive restoration was undertaken. Almost entirely replanked; every structural element was evaluated and either restored or replaced and her engineering systems redesigned. Her sailing rig was again updated, this time to make her a champion racer on the extremely popular classic racing circuit. The efforts of this tremendous two year undertaking were rewarded when she took first place in her class at the 2009 Newport Bucket.

Renamed Summerwind, she is a classic vessel in new condition ready to embark upon a championship career!

Brest: the world’s largest maritime festival in photographs by Nigel Pert & Dan Houston with a … END_OF_DOCUMENT_TOKEN_TO_BE_REPLACED