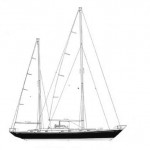 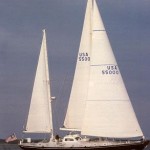 The sixth in a series of Palawans commissioned by the IBM CEO Tom Watson Jr.

Sparkman and Stephens designed her to accommodate the kind of cruising he wanted as he headed into his 70’s. A required a yacht that would comfortably carry extended family but still be able to sail single-handed around the world.

Watson achieved the last of his big three sailing dreams aboard and wrote:

“For me, sailing into the lagoon at Deception was the climax of a project that had been in the making for many years. The event that triggered it began on November 26, 1970, when I awoke in the night with a modest pain in my left side, I thought it was a touch of indigestion, drank some water and went back to sleep. … Shortly, I found myself in the Greenwich (Conn.) hospital. One month later I was discharged, having recovered from a moderate heart attack. As a result, my life priorities were completely rearranged. Being able one day to sit on my front porch in Greenwich, look down at the boat at the dock, and say, “Well Palawan_, we’ve done it all,” would mean the fulfillment of my third dream cruise … to follow Magellan’s track to his Strait” Yachting – September 1986

Brest: the world’s largest maritime festival in photographs by Nigel Pert & Dan Houston with a … END_OF_DOCUMENT_TOKEN_TO_BE_REPLACED