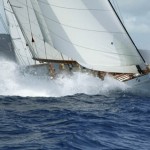 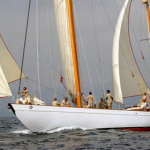 Nordwind was built in 1938 /1939 for the German Navy as part of their officers training programs in the North Sea (Wilhelmshaven).

In 1939 she was the first to finish and to round the rock in the Fastnet race in which she took line honors and established a new record that held for 24 years.   After the war, Nordwind was sent to England and was bought by Lord Hugh Astor who raced her mainly in the Solent.   In the late 70’s, Dutch naval architect Gerard Dijkstra turned Nordwind into one of the earliest classic yacht restoration projects.   Works were started at Camper & Nicholson’s in England and finished in Holland.   Unfortunately though, the restoration of the hull was faulty at the time, hence another complete restoration became necessary which the present owner undertook from 2001 to 2004 in Spain.

She has since participated in many classic races including the 2005 Transat, where she was beat by “Sumurun” by two hours and 34 minutes.   In recent years Nordwind has being covering many miles.   In 2010 Cape Horn and the Chilean Fiords in Patagonia and a Pacific crossing to New Zealand just in time for a refit and a direct trip back through the Panama Channel to be on the starting line of the Transatlantic Race in 2011 from Newport to Plymouth and a few weeks later and after many years the 2011 Fastnet race.   During the Summer of 2012 her captain Alex Veccia and his crew meet the owner Hans Albrecht in the Canadian Arctic and managed to go through the Northwest Passage from Camden, Maine to Homer in Alaska.

Brest: the world’s largest maritime festival in photographs by Nigel Pert & Dan Houston with a … END_OF_DOCUMENT_TOKEN_TO_BE_REPLACED