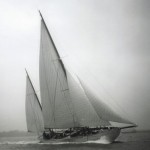 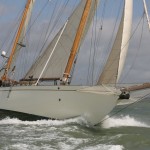 Halcyon was commissioned by the Lancashire industrialist Sir Samuel Turner in 1929 and he kept her until 1944.

A Yachting Monthly article of 1929 spoke of her as “snugly rigged with Bermudan main and mizzen and a sail area of 2275 sq ft, and can be handled with a small crew”.

Below deck the original teak saloon and main accommodation have been preserved perfectly throughout her long life.

During the war we believe she was requisitioned by the navy and spent some time as the flagship of a minesweeper flotilla based in Greece.

In 1957 she was acquired from Madame Renault by the Warsash School of Navigation in Hampshire as a temporary replacement for the ketch Moyana, the winner of the first Tall Ships race in 1956 which foundered off the Isles of Scilly on the return from her triumph. Halcyon proved so successful as a replacement training vessel that the British Merchant Cadet Training School kept her for 32 years, training hundreds of seamen, many of whom went on to be masters of their own vessels and who will perhaps remember her fondly.

Throughout her life Halcyon has been involved in a number of adventures. She came unscathed through the storm which hit the notorious 1979 Fastnet race. She also raced in the Hamilton, Bermuda to Halifax, Nova Scotia leg of the 1984 Tall Ships race in which the Marques was tragically lost during a squall.

Between 1988 and 2004 she was used as a private yacht, cruising a number of areas including the Caribbean, Florida, the Canaries and the UK. Towards the end of 2004 she was taken to Gloucester Docks where she was given an impressive restoration and refit under the auspices of T Nielsen and Company Limited, specialist tall ship repairer and builder.

Brest: the world’s largest maritime festival in photographs by Nigel Pert & Dan Houston with a … END_OF_DOCUMENT_TOKEN_TO_BE_REPLACED