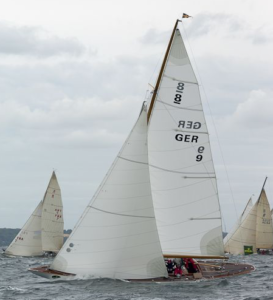 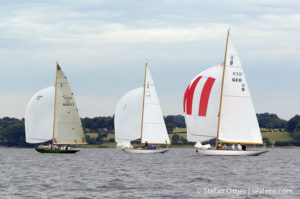 Built for a Dr Krupp von Bohlen and Halbach.

In 1940, Germania III was sold by Krupp for 15,000 Marks to Mr. Miethe, a sailor living in Berlin, who sold the yacht back to Hamburg after one year. Here she sailed under the name of ‘Jamo’, owned by sail makers Janssen and Mordhorst, and survived the bombing raids on Hamburg during World War II.

After the war Jonny Wegener, owner of the Wegener-Shipyard in Hamburg-Altenwerder, bought the yacht and gave it the old name Germania III. In the years 1949 and 1951 the yacht successfully took part again in the regattas around the “Blue Ribbon of the Lower Elbe”.

The next owner became the Hamburg sailor Kurt Wagner, who drove the name cult with the ship so far, that they only drank beer of the brand „Germania” on board. Afterwards, she came into the hands of the Frankfurt lawyer Heinz Wagener.

After his death in 1965 she lay on Lake Constance, where the Duisburg entrepreneur and passionate classic-ship sailor Bernhard Kolbe discovered her and meticulously restored her. In 1990 she was returned to her original condition at the Wegener shipyard in Wedel/Holstein.

Today, Germania III is converted into a touring ship and is located in the old Olympic harbor of the sailing competitions of 1936.

In 1998 Germania III became world champion in the 8mR class.

Brest: the world’s largest maritime festival in photographs by Nigel Pert & Dan Houston with a … END_OF_DOCUMENT_TOKEN_TO_BE_REPLACED