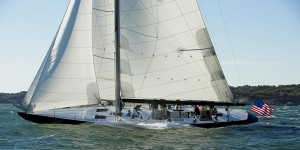 Freedom was the last of the S&S twelves, successfully defending the America’s Cup in 1980. The design was a winner – but the race is remembered for more than the victory.

On the first of the five races of that contest, sailed in a shifting, 10 knot easterly,Freedom suffered the indignity of having her rudder linkage break on the second windward leg. On the next downwind leg, lack of rudder control proved no large problem, as the skipper (Dennis Conner) could steer with the trim tab. But for the final upwind leg, it was necessary to try wrapping a line around the rudder post and leading this to a genoa winch. Steering by this winch device and the trim tab proved manageable but clumsy:

Freedom was forced to feather upwind and to make a major operation of each tack. Nevertheless, her crew performed these maneuvers with such skill that Conner, after winning the race, saw no need to mention the breakage. Instead, he dodged questions about why he had sailed the final leg the way he did, admitting only that his tactics had been ‘unorthodox.’ Thus developed a theory that the canny skipper was really holdingFreedom back in an effort to conceal her real speed.”

Brest: the world’s largest maritime festival in photographs by Nigel Pert & Dan Houston with a … END_OF_DOCUMENT_TOKEN_TO_BE_REPLACED