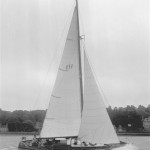 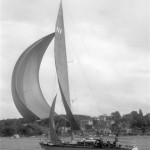 British Registered at Brixham – Official Number 182189.   Commissioned by Major Potter to beat ‘Myth of Malham’,  but after frustration with the ratings he put her up for sale after only 18 months.   She was a well known racing yacht in her early days and competed in the Fastnet race.  Re-rigged with a shorter aluminium main mast with original but shortened boom.   Roller reefing.  Cascover sheathed Moodys 1970.

“I bought her  through Moodys from Whitbread. There was a storyline set around a Whitbread publican who arranged to sail her in the first Round the World Race 1973, but who dropped out at the last minute. I owned her (1972-76) stripped out her racing setup,  refitting her for cruising. For years I extensively sailed Fandango, including right through the eye of a Hurricane”, in 1975 in Brazil. “She’s is unbelievably fast and points a ridiculously  high –12.5 degrees as to make race competitors think she has the motor running!”(David Jackson)

“Fandango is a smaller version of Gulvain and is a Class II ocean racer.   She is a direct successor to the ‘Myth of Malham’, but has longer ends and also has a full reverse sheer.   The longer ends naturally add to her measured length and add to the R.O.R.C. Rating.   Furthermore they have the curious effect of converting a scantling bonus into a scanting penalty.   Myth and Fandango have identical scantlings but one receives a bonus, the other a penalty.   However, although Fandango does not rate so well under R.O.R.C. rules she is the prettiest of the Giles designs of the Myth family.

In Fandango the reverse sloop seems to be at its happiest and the greeny turquoise colour of the hull and dark brown sails seem to suit the boat.  (“Myth of Malham’ sank off Ushant in the early 1970’s and ‘Gulvain’ is in America somewhere).   Fandango is currently onshore at a yard in Kent undergoing restoration after a lengthy period of neglect (2012).

Fandango has now been taken on as a project by IBTC Portsmouth and moved to Boathouse 4 in the Royal Dockyard in September, 2015. Restoration is expected to take 5 years. (Chris Main)

Fandango was in Annapolis / Galesville, Maryland, USA in the early 1990’s, she was owned by the late John Stisted. John sailed her from England to South America then headed north to the United States to visit with his brother Charles Stisted in Davidsonville Maryland. John then sailed Fandango back to England where she was sold. (Mark O’Neil)

Brest: the world’s largest maritime festival in photographs by Nigel Pert & Dan Houston with a … END_OF_DOCUMENT_TOKEN_TO_BE_REPLACED