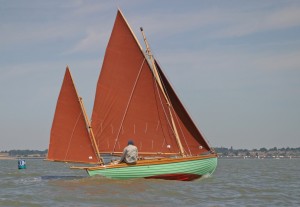 Constance was built to the plans developed for WoodenBoat magazine by Phil Bolger, from the miniature lines and sailplan in the 1906 book The Sailing Boat, by H C Folkard, our only link to Strange’s original design (now available as a Dover reprint Sailing Boats of the World).  The plans give a displacement of 3,400lbs, however calculations by at least two designers have indicated that this value would not be achievable with the robustness of construction I and most owners would want. So Fabian built to the outside of the lines, and raised the gunwale a couple of inches, to provide the volume to support the estimated true displacement of somewhat more than 4,000lbs, and ensure a dry boat. Which she is, having never shipped green water into her small, well-protected cockpit, even in the most boisterous of conditions. The cockpit is not self-draining, but is narrow and deep with a high coaming, providing a standard of shelter which is itself an important safety feature. All lines lead there of course. Accommodation is spartan; she sleeps two very good friends in her cosy varnished interior, and stowage is under the sleeping platform and in halyard bags around the sides rather than lockers, at present. She has a Honda 2.3hp outboard which mounts to a removable bracket deployable either side, and stows away neatly in the stern. It suffices to get in and out of harbours.

Performance is sparkling, Constance is easily-driven by her ample sail area, is not easily stopped by a chop, and gives larger vessels a good run for their money on these accounts. It’s fun to sit out using the tiller extension. The only departure from the plans was to shorten the cabin trunk a few inches so the centreboard can be removed up through the deck. In fact I never now use the board as leeway is negligible without it, and to lower it increases weather helm and adds drag. I suppose I might lower it in in a desperate claw off a lee shore, on theoretical grounds, much as an atheist in mortal danger might pray. When sailing two-up (the practical limit) it is necessary to stow gear well forward and minimise weight in the stern, to maintain the boat’s trim.

As drawn and built, the main boom is quite low, something to be considered if you might build to this design and cannot duck with alacrity. I have downsized all the running rigging, the main halyard in particular was a little snug through its collection of blocks, making it difficult to get the main down in a hurry.

Our base is the Walton Backwaters in Essex, a beautiful spot in itself, and well-situated to visit the rivers Deben, Orwell, Stour, Colne and Blackwater.

Constance’s three-year gestation was partly down to Fabian Bush breaking his leg badly falling in the yard, half-way through the build. I think he agrees that she’s worth a broken leg, though.

Brest: the world’s largest maritime festival in photographs by Nigel Pert & Dan Houston with a … END_OF_DOCUMENT_TOKEN_TO_BE_REPLACED