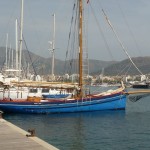 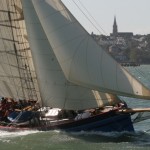 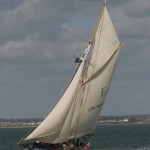 Alexander T (previously named Eleanor Mary), is a large gaff cutter designed along the lines of the Bristol Channel Pilot cutters of the late 19th century.  Her design was inspired by the Bristol Channel Pilot Cutter ‘Marguerite T’ which was built in 1893 by Edwin Rowles at Pill for pilot,  Frank Trott.   ‘Marguerite T’ was owned by John Steele, the president of Covey Island Boatworks, at the time Alexander T was being designed and built.

“She is built using a mixture of old and modern materials and methods to combine the best of both worlds to yield a hull which is immensely strong and requires relatively little maintenance. She has participated in various tall ship races and has been used by us exclusively as a family cruising boat.”

Brest: the world’s largest maritime festival in photographs by Nigel Pert & Dan Houston with a … END_OF_DOCUMENT_TOKEN_TO_BE_REPLACED