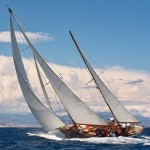 Launched as a schooner, Adria was commissioned by Goebbels, Hitler’s right hand man, and named as ‘Swastika’. Due to the war Goebbels never had a sail on her and once the yacht had been confiscated by the Allies she was taken to England.

After the war she was bought by an English Commander who employed John Illingworth to re-design her as a bermudan ketch, using the original masts.

Over the following years she went through a number of different owners, had a refit in Genoa at the Becconcini Yard and two different names: ‘Briantais’ and ‘Adria II’.

Now back to her original name under her 7th owner ‘Adria’ is regularly seen on the Mediterranean classic regatta circuit and know as a very quick boat, especially off-the-wind.

She is available for both day and week charters.

Brest: the world’s largest maritime festival in photographs by Nigel Pert & Dan Houston with a … END_OF_DOCUMENT_TOKEN_TO_BE_REPLACED