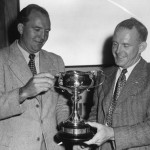 Magnus and Trygve Halvorsen with one of their winning Sydney-Hobart trophies. 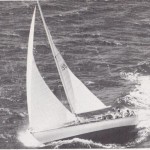 Born outside of Arendal in Norway, the Halvorsen parents and seven children moved to Australia via South Africa in 1925. Trygve was five and his father established the family boat building business at Neutral Bay in Sydney, which he expanded to Ryde in the late 1930’s. Trygve and his brothers were to later take over the business.

Saltwater entrenched in his veins, courtesy of sea captains and ship builders on both sides of the family going back four generations, Trygve, with Magnus designed three Sydney Hobart overall winners which were built by Halvorsens. However, Trygve first sailed the Hobart race in 1946, on Saga with older brother Bjarne, and finished second to Christina. Both were designed by Trygve’s father, Lars.

Trygve’s first time as skipper in the Hobart race was rewarded when he helmed Peer Gynt to third overall in 1947. Peer Gynt’s hull was designed by Magnus, Trygve did all profile layouts and engineering, and the family built her. They also won the 1,512 nautical mile Trans-Tasman race to Auckland race in 1948 and 1949 with her.

Trygve skippered three yachts to victory in the Sydney Hobart; Solveig (won in 1954 after taking line honours the previous year), but Trygve had Stan Darling skipper it in 1954, as he fell ill on Boxing Day and could not sail. Anitra V won in 1967 and Freya won three in succession from 1963 to 1965. “We had a feeling it would win,” Trygve was to later say.

With his brother Magnus (two years his senior) navigating each yacht, they could do no wrong. Nobody else in the history of the race has equalled Freya’s trio of victories and it is unlikely they will.

The brothers also won four Trans-Tasman races between 1948 and 1961, and went on to help initiate Australia’s first Admirals Cup Challenge, competing in Freya.

in the early 1960’s the Halvorsen’s boat building skills were called upon to construct the first Australia America’s Cup Challenger, Gretel, and play a key role in her campaign.

Brest: the world’s largest maritime festival in photographs by Nigel Pert & Dan Houston with a … END_OF_DOCUMENT_TOKEN_TO_BE_REPLACED