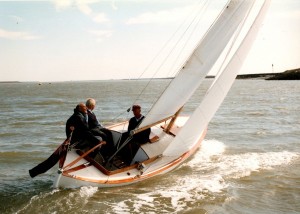 The “Tumlaren was once the most advanced type of cruiser in the world” Uffa Fox!

Designed by Knud H Reimers in an attempt to marry the characteristics of long and narrow with those of the faster Square Meter Yachts that were so popular in Scandinavia during the 1930’s. Over 600 are said to have been built. 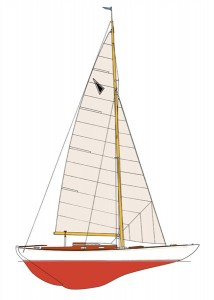 The yacht has a sharp bow and rounded stern that founded the British expression Tumlaren stern. She has an aft cockpit with just enough room to hold a helmsman. The main sheet is attached to a traveler on a wooden strong-back that separates the aft cockpit from the main cockpit.The interior accommodation is very spartan with full length settee berths port and starboard and a v-berth forward of the mast .This allows her to sleep four but this is very cramped with todays measurements of yachts. Aft the port bunk is normally equipped with a small alcohol stove and storage lockers. Additional storage lockers are found to starboard. 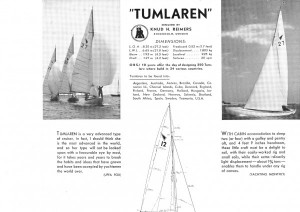 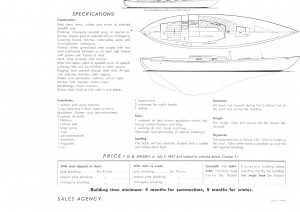 The Tumlaren was also designed and built in a bigger version, the Albatross (or Stor Tumlaren – meaning Large Tumlaren).

Knud Reimers Tumlaren can today be found on all the worlds continents and in at least 24 countries. In Australia they became a one design racing class and the building and measurements where adopted to locally available wood types. 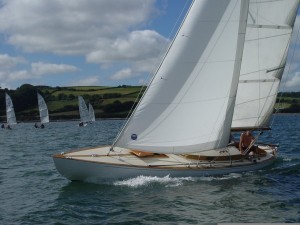 Today Tumlaren are very sought after classic yachts and prices vary from a couple of 100 USD for renovation projects to 30 000 + USD for examples in top condition.

Newly built Tumlaren are still available and among others there is a Finnish company named M-Yachts who still builds them in wood.

Brest: the world’s largest maritime festival in photographs by Nigel Pert & Dan Houston with a … END_OF_DOCUMENT_TOKEN_TO_BE_REPLACED