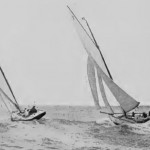 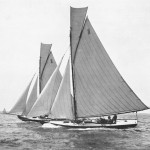 The Solent One Design Class was one of the earliest O.D. classes formed after discussions took place in 1893 and susequent years.   It quickly became popular, and was patronised by some of the most energetic and best known yacht owners in the Solent,Portsmouth and Southampton waters including Sir Philip Hunloke, the Kings yachtmaster. Formed under the auspices of the Solent Sailing Club the class was adopted by the Royal Yacht Squadron and the Island Sailing Club in 1895.

Designed by HW White, ten were built in 1895/6 by Messrs. White Brothers of Itchen Ferry, Southampton and another twelve were built in the following year. The class enjoyed ten years of keen racing but the Metre Rule, which was introduced in 1907 effectively killed the class.

The only boat still afloat is Rosenn, formally Eilun, sail number 6. Now, fully restored, she has been identified as meriting inclusion in the National Register of Historic Vessels of the United Kingdom. She is kept in Lymington where she is still racing and winning on the Solent.

Brest: the world’s largest maritime festival in photographs by Nigel Pert & Dan Houston with a … END_OF_DOCUMENT_TOKEN_TO_BE_REPLACED