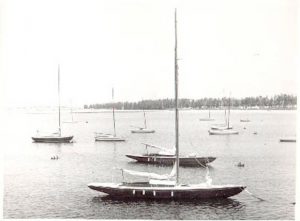 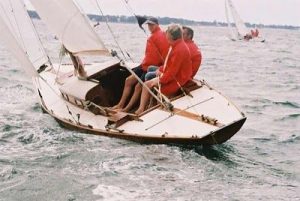 In the 1920s, one-design yacht classes were relatively scarce and dominating form of yacht racing were various construction classes, which’ boats were designed and built one at a time, and thus were quite expensive. Many Nordic top sailors and designers expressed concern about the future of the sport, and Stenbäck argued strongly that only in one-design class the costs could be kept suitably low. As a result, the ‘Hai’ design specified inexpensive materials (Northern pine and oak, iron ballast instead of lead) and relatively small sail area so that winches were not required. The keel was long and shallow, to ensure safety on rocky Baltic waters.

Stenbäck presented his design in 1930; the first boat was built and presented to the public in the next year and the design soon proved popular and many yards began constructing the class. The HSS yachtclub in Helsinki was instrumental in giving impetus to the class before WWII.

Boats were also exported; around 100 boats to France, some thirty to USA and also to Germany, Sweden and Baltic countries. However, class rules requirement of Finnish made sails slowed down growth abroad and although this was later relaxed, no international class association was ever set up. After World War II, the ‘Hai’ faced stiff competition from the Nordic Folkboat and Dragon (which was accepted as the Olympic class) and the ‘Hai’ never achieved the same international status.

However, it was the biggest keelboat class in Finland until the 1960s, when it was supplanted by Hans Groop’s H-boat, also a class initiated by HSS. Despite this, it remains an active competition class and construction of new boats has continued to the day, although in dwindling numbers. In total, around 290 boats have been registered in Finland. The Finnish Hai is somewhat unique in that it has remained very similar to its original form, with wooden hulls and spars – GRP boats are not allowed.

In France the boat (known as the Requin) gained a large following and to date, nearly 500 boats have been registered. Owing to the lack of an authoritative international class association the Requin evolved independently from the Finnish class. GRP is nowadays allowed as a hull material, as is aluminium for the spars. Sail area is also significantly larger: 22.1 square metres (238 sq ft) for the mainsail and 6.93 square metres (74.6 sq ft) for the jib. A genoa is also allowed in Requin.

Brest: the world’s largest maritime festival in photographs by Nigel Pert & Dan Houston with a … END_OF_DOCUMENT_TOKEN_TO_BE_REPLACED