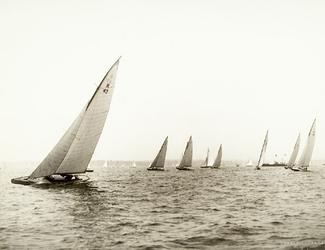 The Universal Rule Class “R” was an important part of American yachting during the 1920’s and the 1930’s.  The class became very strong in most of the country’s principal yachting areas. The “R”s were not a one design class, but rather individually designed and built to a formula that produced yachts in the range of 38′ to 42′.  At one time in San Francisco there were 13 boats locally racing, designed by 7 different designers.  This was very good for the class as well as yachting racing in general.  The competition between designers and builders contributed greatly to the advancement of the sport. 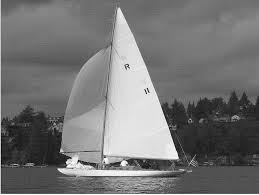 In today’s world we have many one-design classes with hundreds of boats all the same; little advancement in general is generated.   Make no mistake, the “R”s were flat out racing machines, and very much the state of the art at the time. For the most part they were long, lean, and very wet with big rigs. The rule required that they have a cabin (very small) with 2 bunks; no head, engine or electrical system.

Brest: the world’s largest maritime festival in photographs by Nigel Pert & Dan Houston with a … END_OF_DOCUMENT_TOKEN_TO_BE_REPLACED