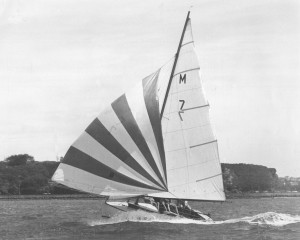 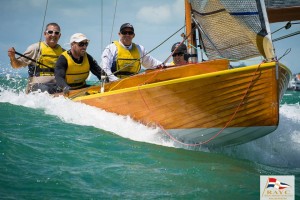 The Emmy, as the M-Class Yacht is affectionately known, is one of the few traditional racing yacht classes that has survived the relentless march of progress. It is testimony to the quality of the Emmy and the dedication of those fine sportsmen committed to it that a class of expensive, wooden clinker boats continues to flourish in a world dominated by exotic, hi-tech materials and keel-boat racing.

Perhaps more than anything else, it is the comradeship that is at the heart of the Emmy’s appeal. For generations of yachties it has been the lasting friendships brought about by the close-knit racing and cruising scene that has made the class so special. At its cornerstone has been the unique facility of the Okahu Bay boat ramp where, with ten to fifteen boats and four or five crew each, the entire complement gather at the same rigging area both before and after the race.

Triumphs and disasters are a shared experience on each boat, to be related and embellished as everybody gathers to assist in the ritual of hauling out ‘the beasts’ over the sometimes treacherous slime on the ramp.

Of the Emmy’s contemporaries in the pre-war dinghy world, none remain. All three of the once- prolific 14-foot classes – T, X and Y – are gone, as has the 16-foot S-Class, which had its heyday in the years up to 1930. The unrestricted 18-foot V-Class, which in the early 1950s evolved into the spectacular Flying 18′s, hung on longest. But they too, have now gone the way of many other open-development classes, their decline hastened by the ever-increasing costs of new technology. (Not surprisingly, though, many of the older and sturdier V’s are still around the Hauraki Gulf, being cruised just as comfortably as always.)

Today the Emmy stands alone as the last of the big, unballasted centreboard dinghies racing on the Waitemata Harbour (or in the rest of New Zealand for that matter). Its survival appears to have been a subtle and finely tuned mixture of good design, tradition, comradeship and plain honest fun, coupled with the gradual introduction of modern ideas without ever sacrificing its ‘essential character’.

While nothing is ever certain, the future of the Emmy is at least promising.

Brest: the world’s largest maritime festival in photographs by Nigel Pert & Dan Houston with a … END_OF_DOCUMENT_TOKEN_TO_BE_REPLACED