The oldest one-design keelboat class in the world.

The plans of the ‘Howth 17’ class were originally drawn up by W. Herbert Boyd in 1897 for Howth Sailing Club. Designed to endure the local rugged conditions that many of the keel-less boats of that era would have avoided and often struggled with, they were to be a miniature of the giant yachts of their day such as Britannia and Satanita. The gaff-rigged design with jackyard topsail provided the first enthusiasts with an immediate challenge when the first five boats raced from Carrickfergus, where they were built by the renowned John Hilditch, and set out for Howth – a 90 mile journey that would confirm the robust design and build of these boats in the spring of 1898. 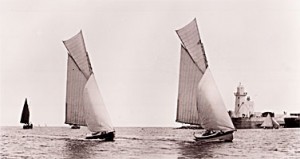 On Friday April 29th at the HSC Spring General Meeting, the class rules were finalised in preparation for racing the following day although inclement weather postponed their race until the following Wednesday 4th May 1898. This was to be their first ‘official’ race of what is now recognised as the world’s oldest one design keelboat which is still racing today as originally designed. 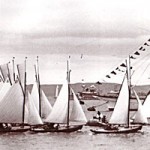 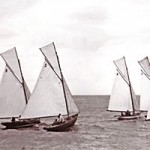 The original fleet of 5 comprising of Rita, Leila, Silver Moon, Aura and Hera was increased in 1900 with the addition of Pauline, Zaida and Anita. The growing class treated its sport with proper seriousness, and after each race the winner was hailed with three cheers by each of the other competing boats – a tradition that is still respected today – treated with some amusement by Howth Fishermen who nicknamed the new boats ‘The Hip-Rays’.

Brest: the world’s largest maritime festival in photographs by Nigel Pert & Dan Houston with a … END_OF_DOCUMENT_TOKEN_TO_BE_REPLACED