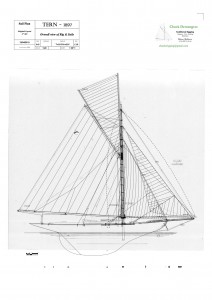 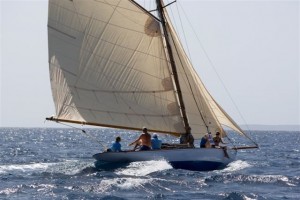 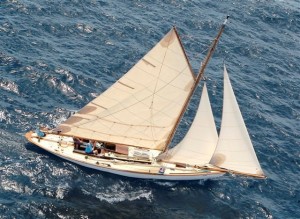 A year after William Fife III had launched the comparatively racy Cork Harbour One Design (CHOD) he produced a class that was to maximize on comfort, rather than speed, for members of the six local yachting centres around the Harbour of Carrikfergus. The BLOD, or Sea-Bird Class, with each boat being named after a sea bird, was launched in 1897. The idea was for one-design racing in a comfortable and relatively dry yacht, which had almost 6′ of headroom down below. They were restricted in depth by the shallows at the entrance to the Harbour, which limited all vessels to a draft of 6’3″(1.92m). They were over 7′ longer than the CHOD and would be more appropriate for passages across the channel to the Clyde and English waters.

Nine of these boats were built at the builders John Hilditch of Carrickfergus, Northern Ireland, some of which still survive today.

Feltie was sail no 1 of the fleet in 1897 but in the Llyods register of 1919 Feltie was listed as wrecked.

Brest: the world’s largest maritime festival in photographs by Nigel Pert & Dan Houston with a … END_OF_DOCUMENT_TOKEN_TO_BE_REPLACED