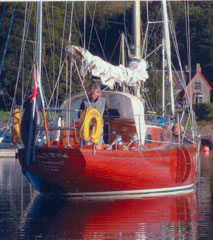 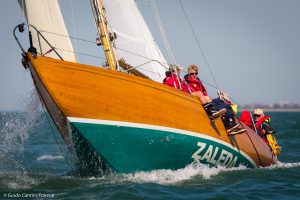 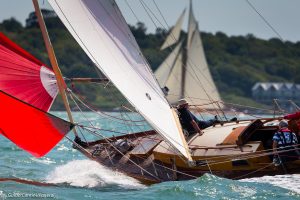 The yacht was built to the International Yacht Racing Metre Rules typified by the 12 metre, 10 metre, 8 metre and 6 Metre boats. In the 1950’s and 1960’s the 8 Metre Cruiser Racer Class was very active on the Clyde with many boats being built by McGruers. The yard wanted to pilot a lower cost design but still one that could be recognised internationally so they took commission from Mr Douglas Nisbet to build the 7 Metre Cruiser Racer ‘Zaleda’.

There were five 7 Metre Cruiser Racers built in total. ‘Norella’ was designed by Maitland Murray and built by Morrison & Lorimers of Sandbank and three further boats were built in East Germany and imported to the Clyde in 1966/7. For two years (1967/8) the 7’s had their own start in the Clyde racing.

Zaleda was built in the Clynder yard over the period July to December 1965 and then transported to the January 1966 Earls Court Boat Show where she was awarded the overall 2nd prize. Sir Max Aitken’s new yacht received the 1st prize but then the Daily Express were the main show sponsors!

She has been carefully looked after by her four owners. My uncle, Mr Douglas Nisbet, owned her from 1966 to 1975. She then moved to the Beaulieu River until 1991 and was owned by Tim Godden. Colin Tindal bought her while laid up next to Drumbeat in Berthon’s yard and owned her for 5 years. She returned to the family in 1996 when she was purchased from Colin Tindal by the current owner.

She had a major refit and was redecked by Silvers yard in the Gare Loch during the winter of 200/2001.

Colin Tindal had the yacht ‘Talisker of Lorne’ currently based in the Falmouth estuary, built by McGruers in 1975, which is a copy of Zaleda but with more beam. Colin had Talisker built when my uncle refused to sell Zaleda in 1974! After owning Talisker of Lorne, Colin went on to purchase the McGruer ‘Talisker Mhor’ currently a member of the BCYC.

When McGruers finally went into administration in 2001 all the documents and drawings relating to the yacht’s design and build were acquired.

In 2004, Zaleda entered the Plymouth Classics and won the ‘Concours d’Elegance’.

Zaleda is currently moored in the River Dart but spends periods on the West Coast of Scotland, cruising her native waters.

Brest: the world’s largest maritime festival in photographs by Nigel Pert & Dan Houston with a … END_OF_DOCUMENT_TOKEN_TO_BE_REPLACED