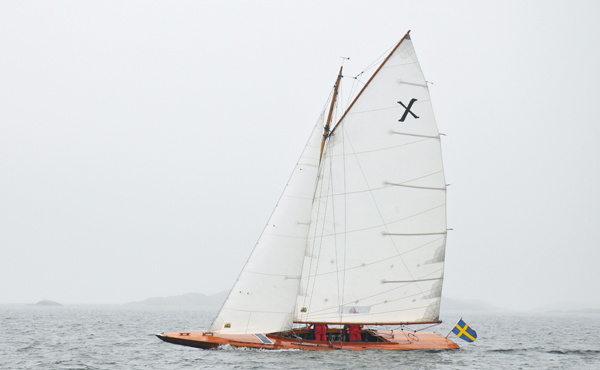 X was ordered by manufacturer Harry Lychou who, with the boat, wanted to show something extraordinary during the Olympic Games of 1912. Before that there was a debate about sailing as an Olympic class. The organizers seriously thought about emitting it, partly because of the bad participation during the London Olympics in 1908 and partly because of the uncertainty about whether the Swedes were going to finish the event.

The main Olympic sailing was with the R classes, but in addition a series of other classes, among them the 50 square metres, started racing. X was built and, partly due to her fin keel, she was so successful that she came to be called Silvertjuven.

In 1916 Lychou sold the boat to Mr. Per Rinman and Karl Steen in SS Brunnsviken.

She was then sold again in 1918 to a fugitive Russian prince. The prince soon got rid of the boat after some events in his home country.

1922 – sold to August Andersson in Nyköping.

A dark autumn night in 1968, the cousins ​​Hats Hådell and Tomas Järnmark sat at a business center in the city and talked about GYS and old yachts. “I know where there is such an old boat down on my ship with a strange old sail”. The next day he dragged his men down to the dock who were amazed at what they saw. X was rediscovered and bought in cash for SEK 4,000, paid by GYS Treasurer Björn Enquist.

A consortium of ten partners were formed for X’s conservation and in 1972 the work began.

Much is known thanks to a benevolent destiny. During the Scandal Beauty Trophy Race at Riddarfjärden in 1973 an elderly gentleman arrived and asked if the boat with the name X in the rearview mirror was built in 1912? The answer was short: “Yes”. – “Then it’s the boat I was a guest in 1916-18”. He was called Johan Magnusson, Jonne. He had a lot to tell about the boat and unique pictures. It is he who told of the Russian prince. That story has also been confirmed by Harry Lychous daughter Mejt. Jonne died in 1978 over 90 years old.

Stefan “Bokis” Andersson sold X in 2001 to a new GYS consortium consisting of Lars Björk, Johan Haasum and Sven Matton. The new owners came to freshen her up and sail her in the traditional ways of the past.

Since 2005 she has been owned by Sven Matton.

Brest: the world’s largest maritime festival in photographs by Nigel Pert & Dan Houston with a … END_OF_DOCUMENT_TOKEN_TO_BE_REPLACED