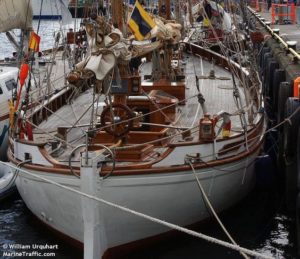 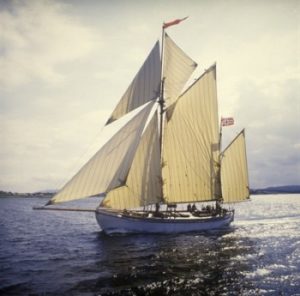 The English timber merchant Frederick Croft, who lived at Stathelle, ordered a high-class pleasure craft and Colin Archer made many sketches and drawings before his employer was satisfied. Built in 1897, the Wyvern was well known for her transatlantic and around-the-world voyages in the mid-twentieth century.
She sank in the Baltic Sea in July 2013 during the Tall Ships Race, was raised in August and returned to Stavanger. Her repairs were reported to have been started in a Denmark Shipyard in December the same year.

When the vessel was launched on August 10, 1897, a great deal of people from the city and surrounding areas showed up. The local newspaper reporter was just as impressed as everyone else: “The pleasure yacht, which was given the name ‘Wyvern’, is unique in regards to size and elegance, as nothing has been spared to make it as steady and comfortable as possible.”
Just tvelwe years later, in 1909, ‘Wyvern’ was sold to Kiel. Her name was altered to ‘Tatjana’ and she sailed under the German flag until after World War I, when she returned to Norway.
In 1934 the proud ship was sold to an owner in Great Britain, by which time she had been renamed Havfruen III.

Under the English flag, Havfruen III earned a legendary reputation thanks to the couple Anne and Terrence Carr, who lived onboard and sailed for 27 years from the year 1947. They crossed the Atlantic 12 times, and sailed around the world during the 1950s.

In 1978 Wyvern was found in poor condition at a mooring buoy in Ibiza. She was purchased by a group of oil related companies in the Stavanger area, and the buyers financed a comprehensive restoration to put her back to her original splendor. The hull was restored in Dåfjord at Stord, the interior work in Stavanger, and the new rigging was made in Risør.

Brest: the world’s largest maritime festival in photographs by Nigel Pert & Dan Houston with a … END_OF_DOCUMENT_TOKEN_TO_BE_REPLACED