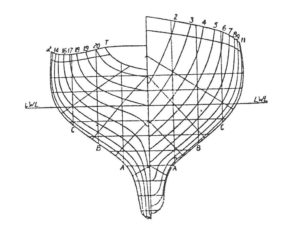 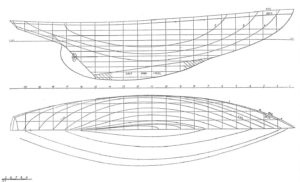 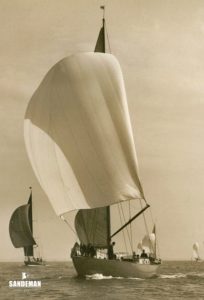 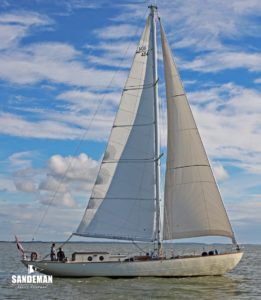 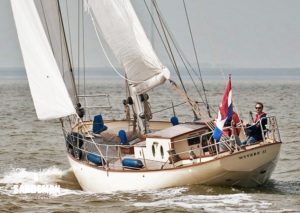 “Though built as a comfortable family cruiser Wyvern II combines these qualities most successfully with seaworthiness and speed.” “Like a number of other heavy displacement yachts with a deep, easy midship section, Wyvern II has proven outstandingly fast to windward in a light to moderate breeze, but she is a fast ship in almost any conditions.”

Built in Antwerp as a cruiser/racer, something of a new concept at that time. In 1950 ‘Yachting World’ published a significant article(extract above) on this yacht and her designer. In 1991 the Dutch magazine ‘Waterkampioen’ put Wyvern II in the spotlight twice.

She has participated in numerous races in the 1940s, 1950s and 1960s, such as the North Sea Race and the Fastnet. It’s impressive how often she achieved high placings – and among worthy opponents, like the much lighter ‘Olivier Van Noort’ and Zwerver. In her first appearance on the race track in 1947 she was first in class in the Harwich to Hook of Holland race. Bob Murdoch also won the North Sea Race with Wyvern II in 1953, 1955 and 1956. Until 1958 Wyvern II was the flag ship of the Royal Yacht Club in Antwerp. Nonetheless designed as a family yacht, Bob Murdoch and his family were using her mostly for cruising from Norway to the Mediterranean.

In the 1970s and 80s, the yacht enjoyed a somewhat more peaceful existence with a new owner on the Atlantic and home port Bayonne in the southwest France. In the late 1980’s the ship was sold again and restored in the Netherlands. After that, she chartered for a number of years in the Caribbean, around the Netherlands Antilles.

A casualty of owner’s divorce, she fell neglected for some 7 years sorely needing some love and attention. In 2001 Wyvern II was seen on the quay in Curaçao, Netherlands Antilles and purchased by the current owner. After she had been shipped to the Netherlands, the restoration began and completed by 2011; Wyvern II began her third life. Since 2011 she has cruised European waters, from Sweden to Spain.

A well-known sister ship of Wyvern II is Flying Mist, now known as Bruma. She is listed and described in detail in several books on classic yachts.

Brest: the world’s largest maritime festival in photographs by Nigel Pert & Dan Houston with a … END_OF_DOCUMENT_TOKEN_TO_BE_REPLACED