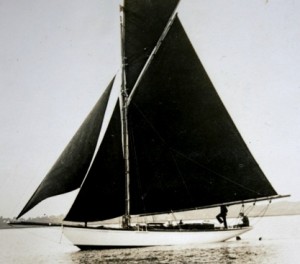 Witch is a cutter built of carvel timber construction with pitch pine planking on grown oak frames, with yellow pine decks and a lead keel.

Witch is listed in the Lloyds Yacht Register for 1902 as a cutter built in 1902 by C Sibbick & Co Ltd in Cowes on the Isle of Wight, with a length of 30.6 feet (the measurement is not the actual length, which is 36 feet) breath of 8.3 feet, depth of 6.8 feet and displacement of 6.33 Tons. The sail area is listed as 951 sq ft with sails by Ratsey & Lapthorn, also of Cowes (in 1910 the listed sail area had reduced to 897 sq ft) . We don’t know the exact launch date, but The Yachtsman magazine states in January 1902 that “Sibbick’s are nearing completion of a 9 Tonner for Mr Wills” which we assume to be Witch.

The owner in 1902 is listed as T G Wills Sandford, whose address is given as 7 Bridge Street Cambridge, he was at University aged 23, and later Castlerea, Co Roscommon, Ireland. Witch’s home port is listed as Kingstown (now Dun Laoghaire) Dublin, Ireland. 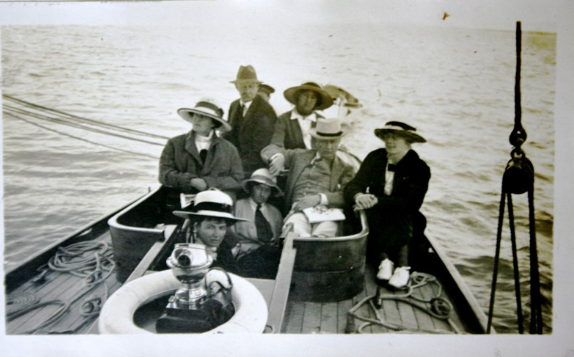 Witch was registered and given the official number of 129009 in 1909. A motor was added in 1921, listed as a two cylinder 3.5 x 4.75, 7.8 BHP internal combustion engine by the Bergius Launch Co of Glasgow. The motor was changed to a 1948 vintage 2 cylinder oil engine manufactured by Petter McLaren in 1960, and later to a 3 cylinder Volvo Penta.

Among several other owners is well known marine author Basil Lubbock, who owned Witch from 1913 to 1921. After his first sail in Witch he wrote: “Very pleased with the behavior of Witch – showed good speed”. 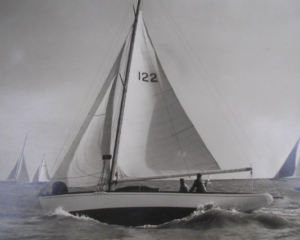 Witch was owned by James Burroughs from 1938 to 1948. She was changed to a Bermudan Sloop in 1938 by P Newell Petticrow of Burnham-on-Crouch, with a sail area of 650 sqft and sails by Sadler, also of Burnham. Witch was raced on the Crouch and in the Small Ship Club races in the Thames estuary. The Burroughs family have supplied some photographs of Witch during this time (see Gallery page), photo copyright Douglas Went.

Witch was saved from being broken up by Colin and Cary Marsh in 1971 and was moored in Yarmouth Harbour at the western end of the Isle of Wight until 2006.

Above information courtesy of www.witch1902.co.uk

Witch was in the middle of a restoration by ship builder Martin Nott, that had been going since at least 2009 when she was sadly destroyed by a fire at the Medina Yard in Cowes on 25th January, 2016. 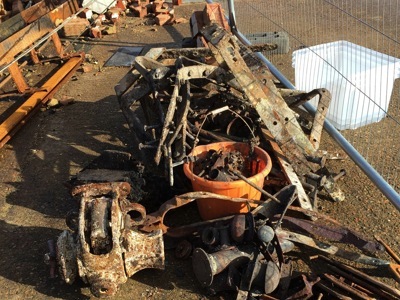 The remains of Witch after the fire

Martin Nott has subsequently gone on to own and restore another Sibbick design Merry Maid.

Brest: the world’s largest maritime festival in photographs by Nigel Pert & Dan Houston with a … END_OF_DOCUMENT_TOKEN_TO_BE_REPLACED