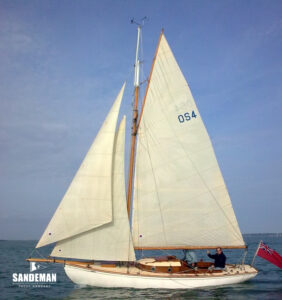 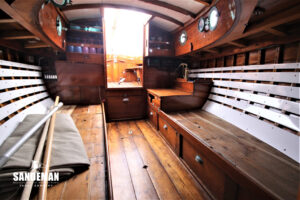 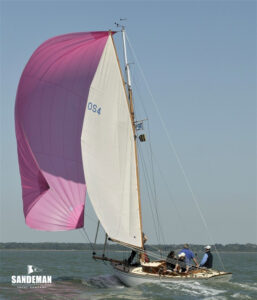 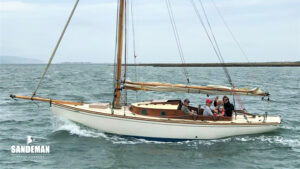 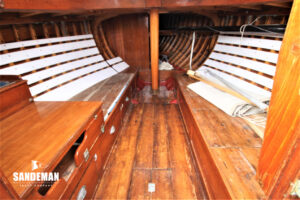 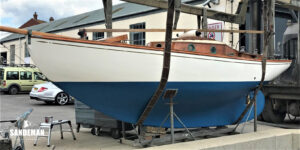 Windflower in the slings

Windflower was born ‘Wee Mac’ – possibly after J.J. Bell’s popular early 20th Century fictional character ‘Wee MacGreegor’. She was the first of three WEE MACs ranging in length from 32 to 55 feet, all designed by Alfred Westmacott and built by his Woodnutt & Co. yard at St Helens, Isle of Wight, for Bembridge Sailing Club member and sporting accountant Adam T. Turquand-Young. His address, Sunningdale, Berkshire, heavily hints at his favourite sport – golf, a passion shared with Westmacott. His son David Turquand-Young was a typical of the times gentleman amateur all-rounder, representing Britain as a modern pentathlete at the 1924 and 1928 Summer Olympics, and a member of England national rugby union team in 1928 and 1929.

‘Wee Mac’ became Windflower when sold in 1934 to fellow Bembridge SC member Herbert Flower, descended from an old eastern merchant family with his home in London and summer home on the Isle of Wight. Flower would keep Windflower for the rest of his life. One curious August 1938 regatta report from Flower’s time describes her coming second in a Bembridge SC round the cans race that entailed motoring for the first round and sailing for the second.

Her first post-war owner – whose name could never be forgotten by subsequent owners as it appears on a brass plate on board – was career Corps of Signals soldier Major Thomas de Burgh Miller, MBE, who spent most of the Second World War with Military Intelligence on Malta. Joint owner with his wife Nina, the Millers seem to have divided their sailing base between Bembridge on the Isle of Wight and Hayling Island on the mainland, with Nina being mainly a Bembridge SC member and Thomas with Hayling Island SC.

From the mid 1960s she remained at Bembridge owned by Mr & Mrs Geoffrey Royle, then back to the mainland and Bosham and Hayling with Brian Woodward. Through the late 1970s into the mid 1980s she was moored on the Hamble River when owned by Charles Coxwell then S. Hetherington in the 1990s followed by John Ryan.

Windflower moved briefly to North Wales in the early 2000s with S. Hetherington’s brother John, before being purchased back to ‘home waters’ in the mid 2000s by Don Wood who gave her the major refit described above.

So for the vast majority of her long life Windflower has been moored within the sheltered but often very choppy tidal Solent, since 2008 in the safe hands of a Lymington-based yachting industry professional. Her designer, Alfred Westmacott, knew these waters intimately, and designed classes of yachts proven for over a century to be very well suited to the Solent chop, such as the X-One Design, Solent Sunbeam and Victory classes – all still going very strong. Windflower’s ability can thus be taken for granted, and her charm is there for all to see.

Brest: the world’s largest maritime festival in photographs by Nigel Pert & Dan Houston with a … END_OF_DOCUMENT_TOKEN_TO_BE_REPLACED