Yacht: When And If 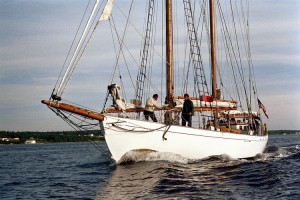 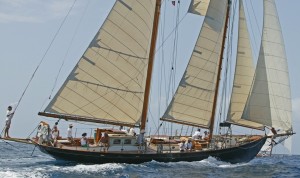 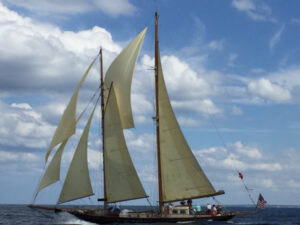 Back when General Patton was Colonel Patton, after the First World War and before the Second, he commissioned the building of a 63-foot schooner.

“When the war is over, and if I live through it,” Patton said, he would sail it from New England to Catalina Island, where he spent summers as a child. The When and If was designed in 1938 and built in Wiscasset, Maine. Meanwhile, Patton went to war, leading troops in the Mediterranean theater and the Battle of the Bulge, but died in 1945 after the Allied victory, before he could return home.

The When and If stayed in his family for years until it was gifted to Landmark School in Beverly Massachusetts where it was used to teach children with dyslexia. Patton himself who had lived nearby in Hamilton was also dyslexic.

Growing up on the North Shore in Massachusetts, I regularly saw the When and If (back when it had a white hull) outside Manchester harbor where it was somewhat of a icon. Obviously, a classic 63-foot schooner surrounded by much more modern yachts demands attention, and the When and If became one of those boats I remember specifically looking for whenever I went out of the harbor.

Brest: the world’s largest maritime festival in photographs by Nigel Pert & Dan Houston with a … END_OF_DOCUMENT_TOKEN_TO_BE_REPLACED