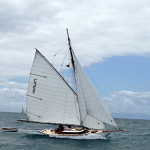 Designed for construction by three amateur builders in Devonport. Plans are held with Arch Logan’s initials on them. These show a keel yacht that was highly advanced for the time, a shorter version of the 36ft keel yacht Queenie which had been launched in January 1904. In turn, Queenie had been a miniature version of the highly successful 52 footer Iorangi, designed and built by Logan Bros for Alexander Turnbull of Wellington in 1901.

The builders were F.J Bennett, his brother and Stitchbury who were members of the NZ Permanent Army stationed at North Head. They built Wairiki on the foreshore of Cheltenham Beach and appear to have had assistance from Albert Warbrick, a son of the famous part maori yachtsman, boatbuilder and rugby player Joe Warbrick. Undoubtedly Arch Logan would have supervised the construction too.

Wairiki planking was well advanced by October 1904 and launching took place in January 1905. The owners raced her principally with the North Shore Yacht Club and the Royal New Zealand Yacht Squadron, but also other clubs, and she was immediately very successful.

Sid Speight owned her for many years and had a formidable racing record including winning the Auckland-Tauranga Ocean Race in 1926, 1928 and 1929. In 1930 Dane Macky bought Wairiki and won the 1930 Tauranga Race again. A.R. Stewart owned her in 1933 but sold her to a Lyttelton owner. She had several owners in Lyttelton and, for a time Nelson.

Wairiki was a victim of the severe 2000 storm at Lyttelton which destroyed the marina. She was sunk and had major structural damage. Her owner, Andrew Gillies, effected repairs but she clearly required a major restoration from stem to stern to regain her structural integrity and original configuration.

Jason Prew of Auckland acquired her, in fact rescued her, and brought her to the Auckland Traditional Boatbuilding School at Hobsonville, Auckland for assessment by its Director, Robert Brooke.

Fortunately, Mr. Brooke considers Wairiki is entirely capable of being restored authentically, such were the integrity of her initial design and construction methods. Once restored, the yacht will join others of the Logan Bros stable already restored, like Jessie Logan (1880), Waitangi (1894), Thelma (1897) and Rainbow (1899) and those in first class original condition like Ariki (1904) and Rawene (1908).

These yachts were amongst the best-designed and best-built yachts in the world of their time and are part of the superb heritage of fine yachts that exists in New Zealand, to the envy and admiration of the rest of the world.

Brest: the world’s largest maritime festival in photographs by Nigel Pert & Dan Houston with a … END_OF_DOCUMENT_TOKEN_TO_BE_REPLACED