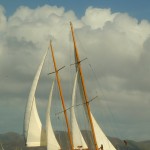 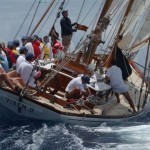 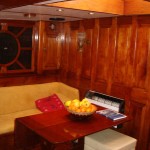 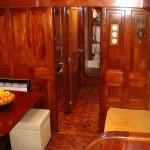 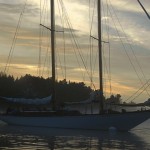 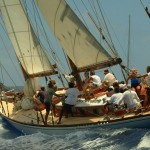 Designed by the revered naval architect Nathanael Herreshoff, Vixen II was originally built as Jessica, one of just fourteen New York 40s – racing sloops with an on-deck length of 65 feet and a waterline length of about 40 feet.   Created as a one-design fleet for members of the New York Yacht Club, these nimble craft are considered precursors to some of the yacht club’s America’s Cup competitors.   As soon as she was launched, Vixen II demonstrated her superiority over her sisters by winning the 1915 New York 40 One-design Series.   This victory was to be the first of a long string of conquests.   Over the years, Vixen has raced in a variety of venues, including the famous Foxy’s Wooden Boat Regatta and the Boston Seaport Museum Regatta.

During World War II, this able craft took on a far different role when she served with the U.S. Navy as a U-boat detection vessel. Two decades later, Vixen was purchased by Dr. George Schimert.   One of the country’s foremost cardio-thoracic surgeons, Dr. Schimert was a pioneer of such techniques as double heart valve replacement and bypass surgery, and was the first to perform open-heart surgery in Asia.   By the time Vixen came under Dr. Schimert ownership, she had been sailing for half a century, and had not always received the care she deserved.   It was time for a complete refit.

After competing in the 1981 Antigua Race Week, her photo graced the covers of both Sail and Sailing World magazines.

Vixen’s complete metamorphosis 1999-2000 also provided the opportunity to redesign her interior to maximize the comfort of the guest accommodations.   Vixen’s rig was also changed from a gaff cutter to a staysail schooner, making her faster because of increased sail area, and easier to manage because the sail area is divided between two masts.

She has proved that she is still among the fastest by being the overall winner in the 2000 Sweethearts of the Caribbean race in Tortola, and first in her class and fastest schooner in the Antiqua classic 2002 race.

Vixen is available for charter.

Brest: the world’s largest maritime festival in photographs by Nigel Pert & Dan Houston with a … END_OF_DOCUMENT_TOKEN_TO_BE_REPLACED