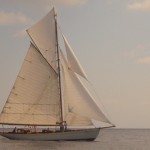 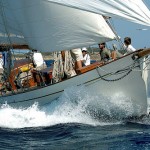 Previously named ‘Nancy Rose’ and ‘Dalriada’ she was owned by a retired Royal Navy Officer and a charter company based in Cannes.   Bought in the early 1970’s by Gian Marco Borea d’Olmo who used her as a training boat and for cruising.   When he died in 1999 his son and daughter, Gian Battista and Ottavia ‘took over the boat and totally refit her in a three year work plan’. ‘They also found the original plans and brought her to the original sail plan as a gaff cutter’.   Restored for the 2005 season and made her debut at the regatta in Porto Rotondo.

Brest: the world’s largest maritime festival in photographs by Nigel Pert & Dan Houston with a … END_OF_DOCUMENT_TOKEN_TO_BE_REPLACED