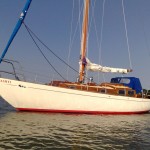 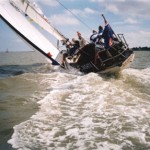 The yacht has been owned by Sir Maurice Laing of the famous building company.

“I sailed on Vashti as an 18 year old in the 1965 Fastnet Race. Can’t remember what position we finished but it was an amazing experience for a young lad! She belonged to Lewis Doble of St Agnes, Cornwall” – John Head

‘I had a daysail on ‘Vashti’ out of Mylor in Cornwall back in 1975.   That’s where she was berthed then.  The owner was Geoff Marshall and he did the first AZAB Race in her that year (or maybe 1979) – John Tom

The present owner(2010), Dr Paul M Wright, has had her for the last 21 years and sailed her over 50,000 miles. “I have made a new Douglas Fir mast three years ago to the original design.  I have just re-engined to a 3 cyl. BETA, and put hot/cold running water in galley, heads and cockpit. ‘Vashti’ will be going to the DCYR (‘Vashti’ is a full VKSJ member), the SYH and BCYC Regattas in 2007.   She is not allowed in the OGA.   She is moored in the Deben at Waldringfield.  I am re-decking VASHTI in Burmese Teak this year, using traditional methods. New teak decks are now completed”.

An memory from John Perryman F.R.I.N.A.

I was one of Mr Buchanan’s draftsmen, 1950/60, and was once detailed off with two other chums to deliver VASHTI from Burnham to Cowes ready for the FASTNET. Such was the weather and the speed of our going that we bore south to Cherbourg for a lobster thermidor (between us). I recall practising my navi skills by laying the two tide course to St Katherine’s Light – with success. Halcyon days!

Mr B perfected his magic on VASHTI, of her type, perfect and without fault. The very memory of her brings a certain wetness to this old man’s (85-year-old) eye.  However, what was the magic? Look at the photo of her close-hauled, healed away from the camera, and there it is:-
As Longfellow might have said..
“Wouldst thou” the draftsman answered
“Learn the secrets of VASHTI?”
Only those who have the “knowing eye”
Can comprehend her mystery”

Brest: the world’s largest maritime festival in photographs by Nigel Pert & Dan Houston with a … END_OF_DOCUMENT_TOKEN_TO_BE_REPLACED