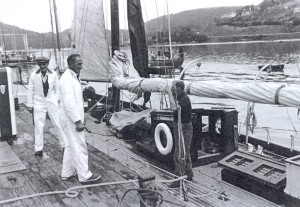 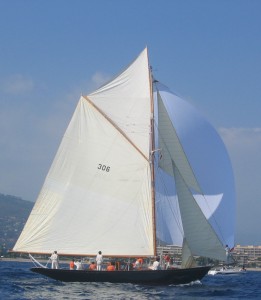 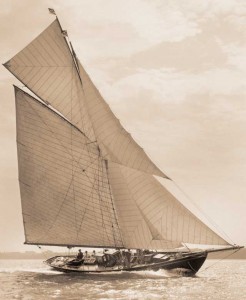 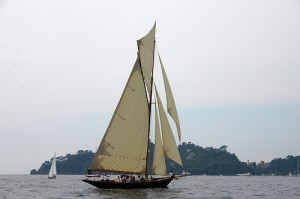 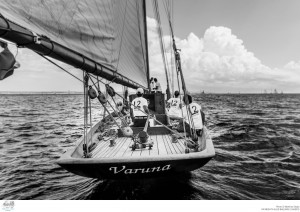 Alexander Richardson must have been impressed by the work at Philip’s so much so that when he was asked by Edward Glazebrook to design a yacht he recommended Philips for the construction. Glazebrook was a timber merchant from Liverpool so it was natural for him to choose a local man to design his yacht, especially a man with a reputation for some fine yacht designs but given that there were plenty of shipyards in the North West there must have been a very special attraction to bring the work south to Philips. Glazebrook named his new yacht White Heather and she was launched into the Dart in 1909. White Heather measured 59’7” on deck, 43’ on the water-line, 12’6” in the beam and drew 8’6” of water. Her bowsprit took her overall length to just over 70’.

Although by modern standards her sail size was considerable with a working sail area of 820sq’, her mainsail was still manageable at 389sq’. The design had many of the Richardson signature features, notably a fiddle bow, sometimes known as a clipper bow also found on the great Iverna and on the little 35’ Myfwany, built by Samuel Bond of Birkenhead in 1897.
Typical of the period she had a long, elegant counter stern and carried the gaff cutter rig common to yachts of the time. She appears to have been designed to 12-Meter Rule, the International Meter Rule having been introduced in 1906, one of the earlier attempts to produce a level playing field for yacht racing.
Typical of yacht construction of the period she was planked in pitch-pine below the water-line with  teak above the water, the teak reputedly supplied by Edward Glazebrook having been seasoned in a bog for many years, a not unusual way of seasoning timber in those days. When she came to be rebuilt in Italy in 2000 the planking was found to be still in near perfect condition and little was replaced. The back-bone and frames were English oak with massive hand forged iron floors and of course a huge lump of lead on the keel.
The most famous yacht of the period was the King’s yacht Britannia and in the course of her life-time White Heather acquired the nick-name of “Little Britannia”.
White Heather was a very manageable size which was no doubt one of the reasons that she survived while many of the larger yachts like Iverna became too costly to run in post 1945 UK.
For the first 20 years of her life White Heather was sailed with her big gaff cutter rig and the accommodation below allowed for 2 paid hands in the focsle. These chaps must have worked hard because it would certainly take both of them and the owner to handle her.
20 years after her launch she came into the ownership of Towers (Trousers) Clark and it was he who modernised her by changing her now old-fashioned gaff rig to the fashionable new Marconi rig, so called after the tall radio masts built for the new wireless transmission by the Italian inventor Marconi, better known to us now as Bermudian rig.
At the same time Towers Clark installed the first engine, a Thornycroft Handy Billy single cylinder thumper with a quarter prop. A 7hp Handy Billy would not have allowed the owner to water-ski behind his yacht but it would have been just enough to enable him to move his 28ton beauty in and out of harbour without the aid of a local boatman to tow him.
Finally, he changed her name to Varuna, the Hindu god of water and the oceans. One cannot help reflecting on the reasons for the change of a yacht’s name, often held to be unlucky though more often lucky for some. White Heather had always been a popular yacht name and in the 1920s there was a famous Big Class yacht of the same name. One can quite understand an owner’s wish to avoid confusions with a larger and more famous sister and besides there is a certain memorable appeal in the name Varuna.
She was then owned for a few years by Clark’s friend Col Jonny Sutton Ward (Life Guards) and in 1953 came into the ownership of Col Ferris St George. He shared the yacht with a chum, Col Mervyn Vernon (Grenadier Guards) but bought out his share in 1962.
Between the Wars, Ferris St George had leave of absence from his regiment to sail the Atlantic with the American legend of ocean adventures and sail training, Irving Johnson and his wife Electra – Exy – in his pilot schooners Yankee 1 and Yankee 2. Johnson was an amateur photographer and many people will have seen his film footage of rounding the Horn in the 4 masted barque Peking. He also made a film showing Ferris St George doing high wire acts in the rigging of Yankee in mid-Atlantic.
Ferris St George’s passages in Varuna are documented in his logs kept by his daughter Lady Didi Earle and reading them is an informative insight into yachting before the days of GPS and radar. In his minimalist style he records a blow in the Channel in Varuna when a passing German freighter gave them a lee while they took in a reef. Can you imagine that happening now on a run over to Cherbourg?
Ferris St George changed the engine to a more powerful Morris Vedette 4-cylinder petrol engine known to the family as “Stinking Peter” which probably reflects the contempt in which engines were still held by an older generation of yachtsmen. She also had a Stuart Lighting Set, a very modern addition at the time.
Varuna’s title documents contain one of the more unusual Bills of Sail ever written documenting the next sale of the yacht to Col St George’s son in law, Sir George Earle.  Instead of entering the sale price as is normal on the prescribed line, Col St George entered the words “in consideration of my love and affection for my son-in-law”. A nice price to pay for a yacht!
George and Didi Earle sailed Varuna out of Ireland for some years still struggling with Stinking Peter before they eventually parted with her to a chap called Hazard in 1976.  She went to Gibraltar and changed from UK to Gibraltar registry.  Her history for the next few years is obscure but she is believed to have spent some time in the Caribbean before ending up ashore and neglected in Italy.
In 2000 she acquired a new and motivated owner who took her to the Cantieri di Imperia where she was rebuilt before eventually being relaunched in 2003 to take part in the Mediterranean Classic Yacht circuit.
Information courtesy of Noss Marina.

Brest: the world’s largest maritime festival in photographs by Nigel Pert & Dan Houston with a … END_OF_DOCUMENT_TOKEN_TO_BE_REPLACED