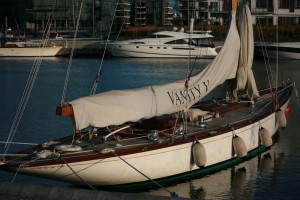 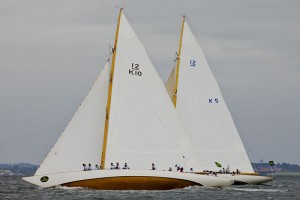 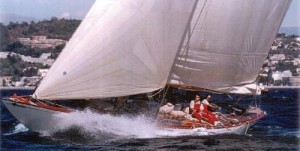 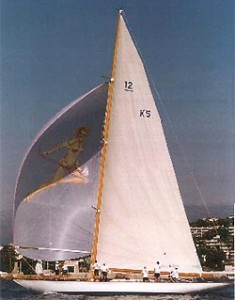 Commissioned in 1935 for £4,000 by the property developer John R Payne, to race at Cowes in the prestigious America’s Cup Regatta.(BCYC) 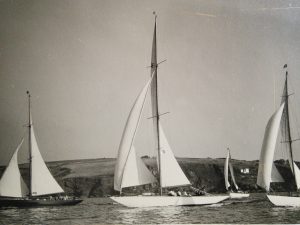 “My Grandfather (who was born in the 1890s) was Walter Paull of Flushing, Cornwall and he was a full time skipper for the Attorney General, Sir Hartley Shawcross from the early 30’s until the late 50’s.

In 1946 they won the Flushing Regatta with the yacht Caryl. The Vanity was purchased shortly after and this resulted in another win the following year. I have attached a photo of the commemorative mug. 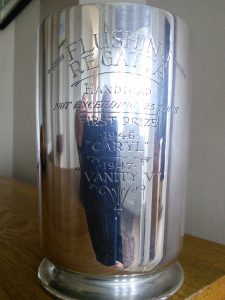 Although my Grandfather and Sir H preferred to sail Vanity ‘fully rigged’, I understand that in approx 1952 an auxiliary engine was fitted. This was to be used only in an emergency, for example if Sir H (who was then a Cabinet Minister) was recalled to Parliament. Whilst Vanity was based at Falmouth, she actually did most of her racing off the coast of France.

My late Father was also a keen sailor and when allowed was part of Vanity’s crew and observed first hand that although Sir H was the owner, on board, ‘Skipper Paull’ was the one in charge! In the late 50s my Grandfather decided to retire and the Vanity was sold shortly thereafter, but even then the friendship between my Grandfather and Sir H continued up until his death”. 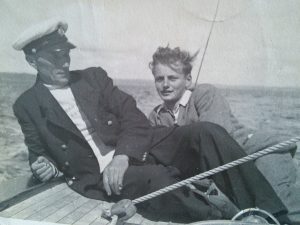 Skipper Paull and Walter Paull on board Vanity V

An account from Captain John Crill who ran Vanity K1

“I was skipper of the first Vanity K1, for Gerald Hommel in the early seventies when Vanity V was still in need of a refit. I gather that Lord Shawcross, when the election was due in about 1951, had Vanity V repainted with a vast “Vote Labour” banner all the way along her topsides.
Vanity, K1, was a lovely boat to sail but needed a lot more money spent on her than Gerald could afford. We sailed around the Med teaching sailing to the Swiss before doing the 1974 Tall Ships Race from Corunna to Portsmouth and then to St Malo and back; the last leg we won against more modern boats like Sovereign and Sabre.
Gerald asked me to make a big sacrifice that winter: Would I take Vanity to the Caribbean. Sure! Off we went on leaky old Vanity, 20 pump strokes every hour and 100 when there was water on deck. We had a hydrostatic drive to the prop which burst regularly spraying hydraulic oil everywhere.
After a season in the Caribbean (broken boom revealing rotten wood inside) we came back and I had appendicitis in mid Atlantic. I got to Faial just in time and they took it out there.
Sailing Vanity was more adventure in a week than most people get in a lifetime.
Although I don’t know the details, I’m surprised that the teredo worm hadn’t eaten Vanity a long time before she sank in, I think, the Saintes.”
Changed name to ‘Pinta II’ under ownership of the French industrialist family, the Provosts.

Restored by Robert Daral and Jean-Paul Guillet who found Vanity V in St Malo in 1997.

Rebuilt in 1999 to the original Fife drawings by Guy Ribadeau Dumas (Ribadeau Website) and Chantier du Guip in Brest.

Brest: the world’s largest maritime festival in photographs by Nigel Pert & Dan Houston with a … END_OF_DOCUMENT_TOKEN_TO_BE_REPLACED