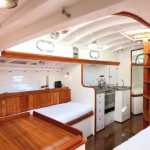 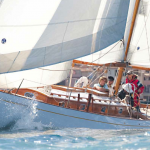 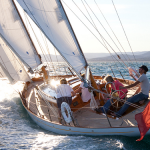 The first Owner was Mr. Eberardo Schweizer, a well known local sailor.   She raced and cruised in the Rio de la Plata under his command and in 1947 placed second overall in the first Buenos Aires to Rio de Janeiro Race.   In 1976 she was bought by Justo del Carril who later gave her to his children Miguel and Sonia who proceeded to re-build her to a “new” condition.

The restoration was carried out by Tito Syzska under the watchful eye of German Frers, the son of the original designer, and it took the best part of two year.   Immediately after the sailing trials were completed Miguel del Carril and a crew of two set out to cruise the Brazilian shores reaching Rio and Bahia to continue across the Atlantic to the Mediterranean Sea to Santo Stefano in Argentario, Italy.  Upon her arrival, skippered by German Frers and crewed by her Owners and a group of friends, she participated in the Argentario Sailing Week 2007 Panerai Trophy winning the First Prize in the classic division and First Overall Panerai Trophy.In 2011 currently owned by Robert Fabre, a 20 year old Englishman who sails her while completing his Carpenters course in Lowestoff.  Vagabundo II finished 2nd in her class at Les Voiles De St Tropez in 2011.

2013 – competing in the Mediterranean circuit.

2014 – competing in the Mediterranean circuit.

Brest: the world’s largest maritime festival in photographs by Nigel Pert & Dan Houston with a … END_OF_DOCUMENT_TOKEN_TO_BE_REPLACED