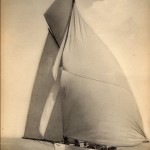 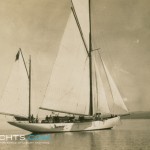 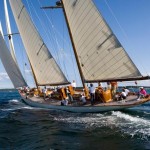 The following report was submitted to the Classic Boat Forum on 26th October 2006.

“Hello all, I have come across a beautiful old girl in a gutted state. Her hull is sound, teak on steel frames, she is afloat and dry and her dog houses, mast etc are complete.   There is a guy living in terrible conditions on board he is doing his best to keep her afloat with no funds or yacht knowledge what so ever.   He claims the majority of her interior and deck hardware etc are in storage in a nearby barn.   Does anyone have any information on this beautiful old girl?   He has lent me some general arrangement drawings dated 15-2-26 from Alexander Stephen Sons ship builders of Linthouse which I am looking over with enthusiasm.

I was the mate aboard and we sailed her from Antigua via Venezuela, Aruba, Panama, Mexico to San Diego. I never realised that would be the end of her sailing days!   Hopefully it wont.   She was owned by a very nice man called Dennis, he was a lawyer from Boston and I think he couldn’t really afford the boat.   He sailed her to Australia in the mid 80’s and NZ ( I first met her in 1988 in Townsville, Australia).   The captain was a mad englishman called David Wright……..

From memory the boat had a bad fire on board in Tahiti in the early 80’s and the boat was gutted, all the interior (when i was aboard) was not original but still very nice, all the deck furniture was original.   The hull was in good shape and the steel frames were also good.   The deck was a disaster and the steel deck beams were terrible.   We chartered heavily in the Caribbean and the decks always let the boat down ( I still have a brochure).   We did the classic yacht regatta in 1991 in Antigua and we won Spirit of Tradition.  I remember the bobstay carried away in big following seas on the way to Panama and we almost lost the bowsprit!”, Information courtesy of Fred Acke

“The Hume family….. owned her from approx. 1947 to 1966.  The yacht won one of the major races from Cowes, the Fastnet race, in 1957.  Having spent many lovely occasions on her in the Clyde estuary in the 1950s and 1960s it is very sad to hear of her demise. She used to list because of the AGA cooker my aunt had installed off the centre-line!” Information courtesy of Ian Macfarlane

“With two friends I joined  Vadura as crew member in May 1965. She was based in Tarragona, Spain where she was undergoing general maintenance including being lifted from her birth to enable us to scrape her clean, including her 12.5 ft keel, and repaint! Her skipper was a cockney  named Joe Cronk with whom we learnt to sail her until September. I was then employed to help look after her throughout the 65/66 winter which included revarnishing the 106 ft main mast! Joe was replaced as skipper by Ove Hamstrup early in ’66 and after Grant was taken on at the same time as Dave Wright I left to crew on a square rigged schooner Carlotta which continued east to the Greek islands”. Information supplied by David Tutcher.

“I am Ove Hamstrup and I was captain of Vadura 65/66 in Palma de Mallorca until she was sold. I worked under the ownership of Major Ides Floor, a Belgian nationalized British. She was sold to a Frenchman called Leclery and then captained by Doctor Christian Jonville and sailed to the Pacific. I don’t know what happened to her after that but Christian Jonville, as far as I know, continued to live, and eventually died, in Tahiti where he practiced medicine.”

“Ian Macfarlane’s comments about the Hume family owning this wonderful boat at some point may be correct, but I can assure you that they did not own her in 1966 as he states. I crewed on her in Palma de Mallorca in the summer season of 1966 and she was owned by a Major Floor, a Belgian industrialist who lived in London.  She sailed under the Belgian flag and was captained by Ove Hamstrup, a Dane. I still have the employment reference Ove wrote for me. I would love to hear if there have been recent reports. Her hundredth BD isn’t far off!” Information courtesy of Grant Reynolds

“I confirm she is a wonderful yacht.   I was sailing on board in the 1970’s when she was in TAHITI.   She was partially destroyed by a fire there and rebuilt locally.   She is a wonderful boat to sail.” Information courtesy of Jean-Paul Ker Rault (2007)

“(2007) It isn’t just any teak, its aged burmese teak[her hull planks]..most of her interior [including carved wooden panels, doors, sinks, electrical as well as water heaters, etc as well as her sails, propeller, most of her teak deck plus new never used teak decking also as well as original skylights made of teak, pine etc are stored in a barn along with a RR Corniche Convertible [low miles] and god knows what else since i couldn’t see too much inside…the owner wants to sell her but he needs an extraordinary person with suitable means and more importantly… taste, and appreciation of beautiful things to buy her…restore her..love her…i pray someone does before its too late.” Information courtesy of Fernando Cartaya

“A good friend of mine, Mike Conally, was a crew member on Vadura around 83-4 when the owner of Minney’s ship chandlery in Newport Beach owned her.  She was in perfect condition then!   What happened!??  I had the pleasure of sailing on her once during the Olympics and we sailed from Newport Beach to Long Beach to watch the sailing races there.   Last time I saw her, she was for sale in San Diego harbor, and like I said, she was in PERFECT shape.   What a shame to hear of her demise.   She was the sexiest yacht in Newport harbor in my eyes.   Mike told me once that Vadura was the tallest wooden mast in the harbor.   Again, if someone is looking for info on her, they may be able to find more at Minneys ship chandlery in Newport Bch CA.   O well.   I pray someone restores her to her former glory. What a pity.” Information Courtesy of Daniel Freeman

(2008) “I had a wonderful experience on this boat with Dave Wright as captain.   I met the ketch and crew – mostly British at that point for the Tall Ships race at Hobart in 1988 as a medical student. Then accidentally ran into her again in early 1989 in American Samoa.   I was totally new to sailing and was useless I am sure, but loved it all and have wondered often about Vadura’s fate. We sailed to Tahiti -slowly- via Suvarov I remember.   She was in beautiful condition I thought internally.   Her wood was maintained and I remember painting the waterline in Bora Bora. Must say I am surprised to hear of her fate if it is true.   I would swap my northshore 38 for it plus my house if possible.   I would love to be in touch with Dave Wright again too.” Information courtesy of Debra Scott

“Nigel Cleal lived and worked on Vadura for 4 years. I met and joined Vadura in Broome, North Western Australia, in 1987 as she made her way to the America’s Cup in Fremantle (my home). We had a fantastic summer off Freo during the Cup. I met her again in North Queensland and then again in Tahiti whilst I was aboard Alvee (since stolen).   I miss her, dream of her and can only hope that someone can save her.” Information courtesy of Natalie Abbott

“I also sailed on Vadura in 1988 after the Tall Ships.   She was in Sydney and the skipper was David.   The long time first mate was a Scots friend of mine, Joe Birch.   I crewed on her up to the Barrier but we had to put into Brisbane due to a cyclone.   She was in immaculate condition inside out, owned by a young US couple who I think had a marina in the US.   She went on to the Far East for a big refit where her decks were removed.” Information courtesy of Andrew Bird

“I just noticed this review of people’s stories about the Vadura.  I swim around this amazing hull nearly everyday off Schoonmaker Beach in Sausalito, CA.  She has been anchored here for atleast 7 or 8 years.   Even in her regrettable condition she is the sexiest boat in Sausalito.   The stories in recent years are not good news for her future.  Currently owned by a man in the town of Bolinas who can barley keep her afloat.  The most recent occupant has been removed due to the fact that he was slowly and systematically dismantling parts that had street value.  Brass fittings, winches, pulleys steering gears, etc.  Her steel frames are rusted and need repair. Since I see her and swim around her often, I would be open to engaging with others in hopes finding a way to helping her stay afloat.  I think the current owner would be as well.” Information courtesy of Bob Brockob
“With two friends I joined  Vadura as crew member in May 1965.She was based in Tarragona Spain where she was undergoing general maintainance including being lifted from her birth to enable us to scrape her clean including her 12.5 ft keel and repaint!Her skipper was a cockney  named Joe Cronk with whom we learnt to sail her until September. I was then employed to help look after her throughout the 65/66 winter which included revarnishing the 106 ft main mast! Joe was replaced as skipper by Ove Hamstrup early in ’66 and after Grant was taken on at the same time as Dave Wright I left to crew on a square rigged schooner Carlotta which continued east to the Greek islands”. Information supplied by David Tutcher.djtutcher@gmail.com

Brest: the world’s largest maritime festival in photographs by Nigel Pert & Dan Houston with a … END_OF_DOCUMENT_TOKEN_TO_BE_REPLACED