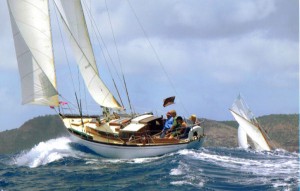 Discovered literally up a creek in Bermuda in 2003 she needed some sprucing up and interior fit out but was in very sound condition having undergone a complete restoration in the 1990s. She has been kept in A1 condition since then. Lived on for 2 years in the Caribbean both cruising and racing (she won many of her races at the Antigua Classic Regatta in 2004 and 2005, and got a 2nd in the Concours d’Elegance), she crossed the Atlantic two handed in 2005. The first year she sailed engineless but in 2005 a Yanmar 3GM30 was fitted in Trinidad before crossing to the UK. Most recently she has achieved notable results in Round the Island races; 3rd overall on handicap in 2007, 2nd in 2008 (and 1st in class of 150 boats) and 4th in class 9th OA in 2009.

Brest: the world’s largest maritime festival in photographs by Nigel Pert & Dan Houston with a … END_OF_DOCUMENT_TOKEN_TO_BE_REPLACED