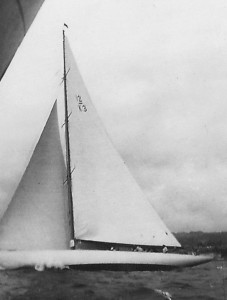 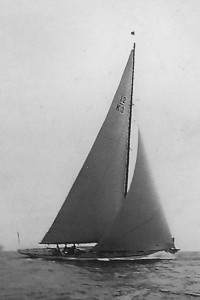 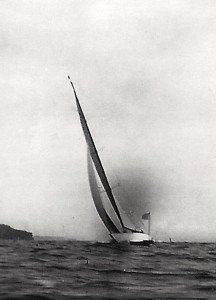 Built according to the Third International Rule Owners.

With Jenetta, Ornsay and Flica II, Tomahawk was one of the ‘large’ Twelves built just before the war. Sopwith wanted a very competitive yacht to race against his friend and America’s Cup (Endeavour II and Ranger) rival Harold Vanderbilt who was building Vim with the aim of coming to Britain in occasion of the famous 12-Metre races. Tomahawk confirmed to be a very fast boat and was the best British 12 of the season. Her design was an evolution of the past 12’s with some new ideas such as one coffee grinder and stainless steel shrouds.

Vim was a total revolution in terms of the hull design, in the deck and interior lay out, in the rigging, in the sails and in the fittings. But fortunately for Sopwith Tomahawk ended up, after 41 starts, with 11 firsts, 11 seconds and 5 thirds with a second placement overall toVim.

While racing, Tomahawk had a very special crew: Sopwith at the tiller, Lady Sopwith was sails trimmer, Ernst Scarlet the tactician, and Franck Murdoch, Tony Thorneycroft and Charles E Nicholson.

Owned by the lawyer Giovanni Agnelli who based her in Savona, Italy. She had an engine installed in 1962.

Owned by Susanna Agnelli Rattazzi and based either in Savona or in Viareggio.

Owned by Circolo del Remo e della Vela and based in Naples.

Owned by M. Bandazzo di Palermo who then sold her for 24 million lire.

Owned by Kari Blaudet who based her out of Finale Ligure where she was used for charter. In 1983 she won the Veteran Boat Rally at Porto Cervo

Owned by Alberto Rusconi who based her in La Spezia.

“Tomahawk is the first 12 to be restored for the new ‘summer’ of the Twelves in the Mediterranean. The restoration took place at the Becconcini Shipyard under the supervision of Giorgetti & Magrini. It did not strictly conform to the original designs as she was directed more towards a luxury cruising yacht than to a racing 12 and one day Tomahawk will undergo restoration which will bring her back to the original plan. She entered in the vintage regattas in the Mediterranean and with her lines and her results attracted the interest of other owners towards the old 12’s. As a result a new renaissance started again for these yachts”.

Brest: the world’s largest maritime festival in photographs by Nigel Pert & Dan Houston with a … END_OF_DOCUMENT_TOKEN_TO_BE_REPLACED