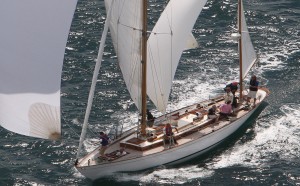 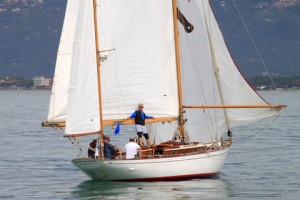 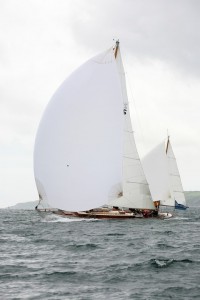 Designed as an ocean-racer with similar lines to the New York 32, ‘Tomahawk’ came to the East coast of America in 1946.   In 1947, with owner Paul W Hyatt on board, she took part in the Annapolis – Newport race and came in fifth.

Up to the 1990’s ‘Tomahawk’ went through a number of owners which resulted in leaving the boat in a pretty sorry state.   In 1999 Brian Pope, a boatbuilder of the Ocean Yacht Company in Penpol, Cornwall, bought her with the intention of one day restoring her.   At the time he was restoring another boat, the 6-Metre, ‘Erica‘ for her owner Richard Bond who, on his many visits to the shipyard ‘fell in love’ with Tomahawk and eventually bought her in 2004 and had her restored by Brian Pope for 2006.

The interior keeps to her original design and she is back sailing and racing turning heads wherever she trims her sails.

Brest: the world’s largest maritime festival in photographs by Nigel Pert & Dan Houston with a … END_OF_DOCUMENT_TOKEN_TO_BE_REPLACED