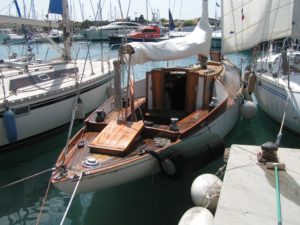 “Originally called just “Tinto” she was built for Mr Young of Lanarkshire who owned her from 1957 until 1974.   Tinto was a truely magnificent yacht built to a very high standard indeed.   She was built to the new international cruiser/racer 8-Metre formulae devised by the famous James McGruer of McGruers of Clynder, arguably the finest yacht builders of the 1950s and 60s.

Together with Robertsons, Morris and Lorimer, and Fairley the Clynder boat yard of McGruers established the new ocean racing/cruising class.  CR8s were an absolute joy, perhaps not so lean as a pure straight eight racer, they nevertheless were exceptional boats built by the best Clyde yards, and good competition for the equally fine products of Camper and Nicholsons in the South.   CR8s were rare, only 23 were built on the Clyde.   Although the introduction of fibreglass finished off many wooden yachtbuilders Tinto was an exception.   Most CR8s were built at McGruers but Tinto was built at Fairley.   Strictly it is not a Fife yacht as the original Fife yard was gone by the time she was built, but that in no way lessens the appeal of Tinto which was indeed built by some old Fife craftsmen.    Tinto was also not designed by William Fife but by the very talented young naval architect, Archibald Macmillan Junior.   It is obvious that he was greatly influenced by Fife as Tinto is as gorgeous and clean a little racer as Fife’s master works.

Tinto was one of two CR8s built at Fairley.  The other was the counter sterned “Charm of Rhu” (K12) built in 1963.   Arguably it is the stunning canoe sterned Tinto which steals the show, although they are equally fine yachts.   The last CR8 was built at Robertsons of Sandbank and it was Sunburst (K23) designed by David Boyd in 1967.   Tinto was well known to me from afar, but sadly in the mid eighties she was very badly neglected.   She fell into the ownership of those who did not know of her historical importance or indeed how to even sail her.   The inevitable happened and Tinto parted her shoestring mooring and was driven ashore on rocks near Kyle of Lochalsh in a storm.   Tinto took a severe battering and it is a testament to her sturdy construction that she survived.   The rocks of Balmacara at the War Memorial were strewn with chunks of her keel.   I saw her on the hard at Inverness after that and she was sold c1987.   Form whence I lost contact with this beautiful yacht.   I rather hope she has a more appreciative owner and audience nowadays.” Alex Mackay

“As the grandson of a previous owner, Brian Mcglennon, I can confirm that a storm dragged her mooring towards the rocks at Balmacara Village, however she was not seriously damaged and I can assure you no chunks of her keel were found strewn anywhere. The following season she was slipped at McGruers yard in Gairloch and to be in good shape. She was subsequently sold to a professional yachtsman whose father was involved with the construction of Tinto 2. She was enjoyed by my Grandfather’s family for many years, touring the west coast of Scotland and the Clyde”. Andrew Richardson

“My father-in-law, Bill Leonard, worked at Fairlie, as a shipwright, several times during his working life right up to the yard’s closure circa 1965/6.   My oldest brother-in-law worked there as an apprentice shipwright completing his apprenticeship at a yard at South Shields and they talked about a yacht called ‘Tinto’.   My younger brother-in-law, James, trained as a sailmaker and both have had careers in sailing.   Billy was construction manager on the ‘Endeavour’ build at Freemantle and is now a curator at the ‘old’ maritime museum in Perth.

Around 20 years ago James’ girlfriend, Molly, an American, bought ‘Tinto’ and had her shipped to the south coast of England where James was overseeing the build of ‘Beagle’, an Arctic cruiser. He then restored ‘Tinto’. She is now in Nice, France, where I believe she is deteriorating again” John Blewitt

“We sold Tinto to Pierre Leo in about 2011 and I when I was racing in Marseille in 2014 on the Theo Danel designed Kiss, Tinto was sailing beautifully, high up in the fleet but was  not in very good shape (even the herbs in the spice rack were rotten and my hair conditioner was moldy in the head.) I had a glimpse below. The owner was not well and when I tried to get in touch with him (I thought the family might be able to buy her back) both Pierre and Tinto had disappeared. I am back in the south of France this summer and would love to find out where she is”(2021). Molly Holt

Brest: the world’s largest maritime festival in photographs by Nigel Pert & Dan Houston with a … END_OF_DOCUMENT_TOKEN_TO_BE_REPLACED