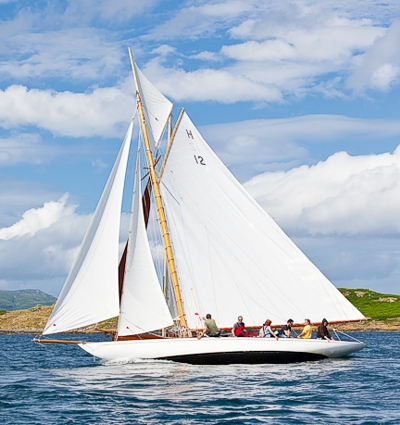 The Truant was commissioned by Ralph Gore, Commodore of the Royal Yacht Squadron, who won many races in her. In 1912 she was UK class winner, as well as European champion in Stockholm, and she remained there during WWI, moving to Norway and then Ireland, where she was used for cruising.

Rediscovered in an Irish potato patch in 1963, The Truant was sailed hard for some years and then given to the owner’s godson – who wouldn’t want a 1910 Fife 8-Metre as a present? However, the boat was in need of a complete restoration and Ross Ryan was starting out as an artist, without the funds to do the job. Years later she was restored locally by Adam Way.

Brest: the world’s largest maritime festival in photographs by Nigel Pert & Dan Houston with a … END_OF_DOCUMENT_TOKEN_TO_BE_REPLACED