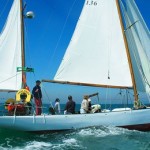 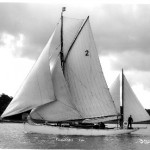 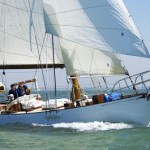 Among her early owners were some well known sailors. J.C. Ponsonby (one of the Ponsonby twins) raced her in the 1927 Fastnet before she went to Captain Alfred Rosling and then to Guy Napier-Martin. None of her owners kept her for more than two or three years and she went through numerous changes of rig from gaff to Bermuda and back to gaff again in the early thirties.

During Napier-Martin’s ownership she was sailed by John Illingworth, probably the most famous sailor of his time and the founder of modern ocean racing. He played with her rig and sailed her in the 1934 Fastnet, having negotiated the race regulations with the RORC to make it easier for boats with a 35ft waterline to enter. In his well-known classic “Offshore” he mentions that he got Thalassa’s mizzen staysail down to a reasonable size and sailed hundreds of miles with it in 1934 and 1935. He also describes his design for the third berth in the saloon and on a more basic level says he will never forget the terrible stench of wet oilskins (the old variety) in Thalassa’s heads!

When she was bought by Alan Baker her rig was completely redesigned by his friend Jack Laurent Giles and that is when she acquired a taller mast and started to look like the Bermudan yawl we know today. This was typical of Alan who was always modifying and modernising her to get the best out of her for ocean racing. With this new rig she won the Aralus Plate in 1937 and 1939 for the greatest number of points in “A Division”. In 1938 she went off to Heligoland, off the German coast, and on to Copenhagen, only a year before war broke out.

Her war years were spent in a mud berth in Brightlingsea before West Mersea became her home. She was one of the small number of boats who started up ocean racing again in 1946 and as well as the RORC races, which covered places as far away as Spain and Norway, she raced successfully on the East Coast and frequently to Ostend. On one occasion she was feared lost in a gale on the Santander race and for 2 or 3 days anxious relatives were tuned into the BBC news. It turned out she had been tucked up in a quiet anchorage to ride out the storm while the crew slept.

These were her golden years of racing, but Thalassa’s fame grew from the almost legendary reputation of her crew and their relationship with the ‘Owner’. Their antics are well documented by Sandy Sandison in his book “To Sea in Carpet Slippers”. Very early on they decided “to race Thalassa as hard as they could on every possible occasion and in doing so to extract the maximum amount of fun and enjoyment. This included eating well, drinking deep and refusing to take anything or anyone, especially the Owner, seriously”

All the crew had large appetites and at the start of one Fastnet race they anchored in the lee of Hurst Castle and dined on roast beef before turning in and taking the favourable tide in the morning. They repeated the same thing in Weymouth Bay the following night!

By 1966 when Richard and Vivian took over Thalassa following Alan’s death, the ocean racing scene was changing rapidly and Thalassa was becoming outdated as a racing yacht. So this was the start of a new era. First she went to Dun Laoghaire in Ireland, where with the Royal St George Yacht Club she raced around the cans and was cruised with family and friends. Vivian re-designed the galley and made it much more manageable and in 1971 Thalassa went down to the Med and overwintered in Gibraltar returning in 1972. Since lying in Gosport she has cruised on the South, the Southwest and East coasts and every year in Brittany or Ireland

Brest: the world’s largest maritime festival in photographs by Nigel Pert & Dan Houston with a … END_OF_DOCUMENT_TOKEN_TO_BE_REPLACED