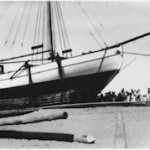 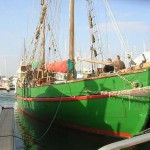 Commissioned by a Major in the Indian Medical Corps, he chose to build the boat in India because of the range of exotic hardwoods then freely available. He had her ‘beautifully fitted out with Indian woods’ and she was shipped back to England as deck cargo – quite an undertaking for a vessel weighing some 65 tons.

During the 1930’s  Tectona was sailed as a yacht by her original owner. She was cutter rigged, later she was briefly a yawl, and the original step for the mizzen mast can still be seen in the aft cabin today.

Between 1939 and 1945 she was laid up during the war and then used reputedly to ferry materials and people in the West of Scotland.

After WW2 she had a new owner and according to Allan Villiers who chartered her in the early 1960s, was ‘all but ruined, with oak planks added outside her copper (sheathing) and iron fastened… (his emphasis) Gutted to go fishing but never went… Ill-handled by a couple of scrap iron merchants who proposed to sail in her to NZ but didn’t go…” The rig was converted to gaff ketch in 1953.

who had a sympathetic eye for traditional craft and invested in refitting her back to some of her former glory. Villiers described her as “Still rough… and missing her original teak deck-house…” but “…a good ship and the gear good.” He cruised from Cowes to Cornwall and wrote about it for National Geographic Magazine (August 1961 Vol 120, pp 149-202) – some excellent shots of Tectona and an insight into how very different the world was then. The following year she was also chartered for a cruising holiday by the Mickley family, again skippered by her owner Tom Blackwell seen here at the helm.

In 1964 Tectona was acquired by Plymouth City Council to be used as the sail training vessel for The School of Navigation. In 1968 she was pictured, dressed overall while anchored off Fisher’s Nose when Prince Phillip was visiting the seamanship centre. Both deck and engineer cadets were able to spend up to a week cruising in the English Channel. Alston Kennerley recalls that “The seamanlike conduct of cadets involved in the annual race to Fowey, at the time of the disastrous Fastnet Race of 1971, earned a commendation from the Navy.” This time was not without incident however, and in 1978 she fell away from the wall when moored alongside in Roscoff. There was some damage to her planking and frames on the port side amidships where the repair work inside the hull (carried out at Mashfords, Cremyll) can still be clearly seen today.

In 1980 she is sold by Plymouth City Council, and is registered to a charter company in Guernsey.

In 1987 Tectona is bought by Verein Plus, a Swiss charity devoted to helping dis-advantaged young people through centres ashore – one a very remote mountain chalet – and wishing to extend their operation into sail training. This begins another busy period for the vessel, and she is cruised widely in the Mediterranean and eastern Atlantic staying in commission for up to 11 months each year. Their success with sail training results in ever more challenging youngsters being brought aboard but Tectona proves an excellent hands-on sailing vessel for this kind of work. Her accommodation is re-designed to give a large social space forward of the main mast, with a separate crew cabin opposite the galley. The Gardner diesel is replaced by a more powerful and compact V6 Baudouin engine in 1991, and she is equipped with basic but adequate electronics and a 4KVa generator.

By 2003 there were intrinsic problems inside the program of Verein Plus lead to recurring problems and finally to the decision to give up the activities, Tectona is sailed into Port Napoleon marina at Port St Louis du Rhone near Marseilles and laid up afloat. She is put on the market and remains alongside until 2006 when a prospective buyer has her hauled out for survey by Tommi Nielsen, the well known expert on traditional craft from Gloucester. For various reasons the sale does not go ahead and she remains back afloat for a further year, being kept an eye on by her former skipper Martin Wenger.

In 2008 and after considerable debate and numerous re-calculations on the back of an envelope, she is bought by Dr Roger Crabtree, an early-retired West Country GP and lifelong sailor. His plans: to refit her and sail her back to Plymouth to resume sail training with Cremyll Sailing, with the final aim of offering the sail training experience to victims of mental health and drug dependence problems.

On 5th May she arrives back in Plymouth after an 1800 mile voyage skippered by Martin Wenger and crewed by Roger and 8 friends – all volunteers.

They encounter a complete range of conditions from flat calm to full gale. Despite her lack of paint and varnish she performed excellently and showed herself still to be a strong and capable sea boat.

On 16th May Roger takes over as skipper for the final leg of her voyage to Polruan where she has her main deck replaced at Toms Boatyard.

Now (2014) operated by the ‘Tectona Trust’ thats works to bring the benefits of adventure sailing to people with mental health or rehab problems.

Brest: the world’s largest maritime festival in photographs by Nigel Pert & Dan Houston with a … END_OF_DOCUMENT_TOKEN_TO_BE_REPLACED