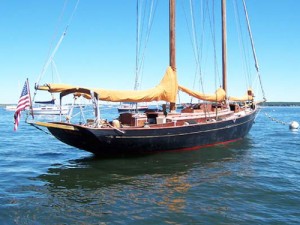 Carl Sherman sold her to Hollywood film director Daniel Adams, and Adams sold her to Portland Yacht Services after 5 years. She then undertook a much needed refit.

Tar Baby is not only known for her beautiful design and balanced helm, but also for her stunning interior. There is a chapter on her in the book “Classic Yacht Interiors”, published by W.W. Norton & Company, and also in the book “John G. Alden and His Yacht Designs”, published by McGraw-Hill. Benjamin Mendlowitz, the world’s premier marine photographer, has a chapter on Tar Baby in his popular book “Wood, Water & Light”. She has been the subject of numerous magazine articles.

There were nine schooners built to her design (#390), Tar Baby being the first and now, sadly, the last survivor still in original condition. John Alden personally owned two sisterships to Tar Baby: the first right off the ways Venturer; then, in his retirement, he bought back Abenaki to be his personal cruiser. After purchasing his retirement yacht he wrote an article for Yachting Magazine stating that the 390 was his favorite design. He then went on to win second place in the 1950 Bermuda race in Abenaki. Another 390, Arcturus (extensively rebuilt, but still in service in New Zealand) was owned by General George S. Patton. He and his wife sailed it to Hawaii and back when he was stationed there prior to World War II. Arcturus was later owned by actor Gene Kelly.

Brest: the world’s largest maritime festival in photographs by Nigel Pert & Dan Houston with a … END_OF_DOCUMENT_TOKEN_TO_BE_REPLACED