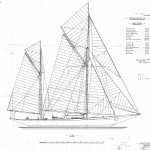 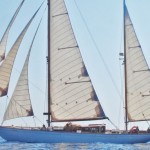 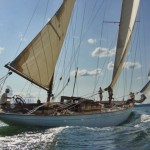 On 28th September 1920, Talisman was launched under the personal supervision of her designer Henry Rasmussen, a sailing friend of Herr Schroder, her commissioning owner. She was the first steel sailing yacht to be built by Abeking & Rasmussen – a gaff rigged ketch of 18.6 meters and 37 tons in the class “Touren-creuzer” – and without an engine. Built of steel she was registered in the highest classification; 100A by Germanische Lloyd.She made her first media appearance 1921 in the German sailing magazine “Die Yacht” with a 3 page article detailing an autumn cruise in Danish waters. Ahead of his time in not having her built of wood the owner himself concluded……. “……….all the bad qualities people claim steel to have, are completely false. Most comments about steel yachts are only out of hearsay ….and a total lack of experience of building a modern yacht in steel. Furthermore she has qualities no wooden yacht has. The bilges are completely dry and the iron keel gives her a top class steering capability.”Talisman’s interior was to very high standard of build and finish with the best materials available – but it was in sailing her that inspired Schröder to comment:“It’s a real joy…… she not only has the most exquisite sailing capabilities and sea worthiness but also can be looked upon as a very fast yacht. This gives me great pleasure since so called initiated yachtsmen have spoken about her and Tourencreuzers in general as “fat and slow”…” In due course she was sold on to another friend, Hans von Eiken, a keen sailor and owner of a smaller Abeking yawl, LATONA, which name he was to transfer. Henry Rasmussen continued to sail – along with other distinguished guests including HRH Prince Heinrich von Preussen, before he took possession of his own yacht AYESHA. LATONA was definitely not a slow yacht – in one race maintaining an average 9 knots.In 1927 she was sold to the president of the Swedish Linköpings Mechanic Industries Gustaf Erik Weyde. He was to install LATONA’s first engine, a 35 HP Kermath Diesel. Under her new ownership LATONA took part, in a lot of races and regattas throughout Scandinavia – not to mention also entertaining his mistresses; deemed a bit scandalous in those days.On 14 July 1934 berthed in Copenhagen, she suffered a severe fire during refuelling and while the interior and most of the deck were written off, the hull survived intact. After the accident that was acquired by an engineer Plum at Burmeister & Wayn Shipyard in Copenhagen. Among other things, Plum added some 2 metres to her LOA, it seems by way of a new bow. She was then sold to a Danish gentleman Percy Ipsen, who had owned several yachts named CAPRICHO, which this yacht now became and after his renovation of her interior, was to last him until 1952, when she passed to another Danish tycoon Svend Illum. It was he, who changed the rig from gaff to Bermuda but kept the name. Sometime in the early 1960s she was bought by George-Wilhelm Engler, who painted her dark blue, sailed her to Pollensa in Mallorca and fitted a 48 HP Lister Diesel. Then in 1965 she was donated to Hanseatische Yachtschule in Glücksburg. Sailed 2,894 miles north again under Rear Admiral D.H. Rösing, via Gibraltar, a turn to the Azores and Falmouth, back in Germany she was painted white again and fitted with 14 berths for her new training role. This was to last until 1980 when she was sold to Jürgen Fiedler from Hamburg and some colleagues. They started their ownership with a major restoration, mainly concentrating on the interior and once again she became LATONA. She sailed in the Baltic for a few years before Fiedler took sole ownership and sailed her back Mallorca to be berthed in Palma – as a floating holiday home. In March 1999 for sale again, she was spotted by Rickard Bosson-Berg. Negotiation and a survey led to her purchase that July, whereupon she got her original name TALISMAN back after 77 years.Substantial restoration then took place, including significant replacement of steel plating and much of the interior. The engine was overhauled also to be moved forward subsequently and an Aqua Drive System was installed along with new bilge pumps and electronics and she was newly painted ivory white. In October 2001 TALISMAN returned to her old home waters. Her sailing capabilities proved excellent. Not racing, she nevertheless averaged 7 knots and whatever the weather conditions, behaved in every respect better than her owners’ wildest dreams on her 8 day 1,200 mile passage to Lake Malaren. Despite the ice and blizzards of successive Scandinavian winters, she has flourished. Further works included construction of her new doghouse, skylights and substantial deck renovation and sailing in Scandinavian waters she has been much enjoyed – and admired, especially during the celebrations for the 175th anniversary of the Royal Swedish Yacht Club Between March and October 2006 Talisman was moved to the Conrad Ship Yard in Gdansk where works on her interior and systems were carried out. These included new engine, water maker, air-condition, heating, bow thruster – maintaining her as vintage yacht while adapting to modern expectations. Sailing back to Stockholm in November’s harsh conditions proved the perfect delivery trial. Since then she sailed south again to the Italian west coast. Le Grazie near La Spezia became her summer home port until 2010 and she sailed extensively in the Med, taking in most of the big islands as well as participating in Monaco Classic Week and Les Voiles de St Tropez in 2007 and 2009. In 2011 it was decided to bring her back to her old home waters again and by late July she was berthed in Stockholm.

Brest: the world’s largest maritime festival in photographs by Nigel Pert & Dan Houston with a … END_OF_DOCUMENT_TOKEN_TO_BE_REPLACED