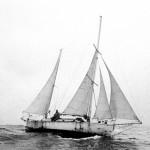 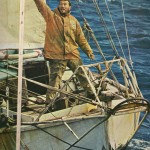 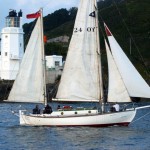 Designed as “Eric” in 1923, her design is based on the Norwegian sailing lifeboat designs of Colin Archer. Signal Letters MHYU. Began as a concept whilst serving as 2nd Officer on a deck passenger ship trading between Bombay and Basra with two 3rd Officers Peter Jordan and Mike Ledingham. Building started on a slipway in Bombay Docks in 1963 using teak throughout. The keelson is 1’ 2” x 10″ and  22 feet long, planking 1 ¼ “ teak.

She is the first boat to ever sail non-stop around the world in 1968/9 with Robin Knox-Johnston (RKJ) at the helm.

No one would call Suhaili a greyhound, but she is solid, strong and a very good seaboat.

In 1997 Suhaili went to the National Maritime Museum at Greenwich as an exhibit, but the controlled atmosphere began to shrink her planking, and, unwilling to see her die this way, RKJ removed her in 2002 and re-fitted her again. She still belongs to RKJ and is currently being slowly re-fastened at the Elephant Boatyard at Burseldon, Near Southampton, UK with the objective of getting her back into commission.

Brest: the world’s largest maritime festival in photographs by Nigel Pert & Dan Houston with a … END_OF_DOCUMENT_TOKEN_TO_BE_REPLACED