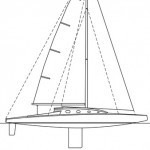 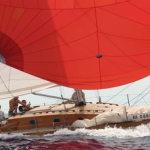 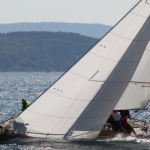 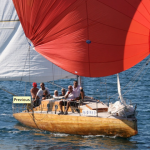 Launched in Ravenna, Italy, 1967.  A project by Giuseppe Belardi (1898–1972), amateur naval architect, active in Ravenna. Several other Belardi boats have been built, all of them locally. Strale was built by master carpenter Angelo Montanari, also located in Ravenna, who was also subsequently responsible for her thorough renovation in 1992.

Strale, rated Class I under the then prevailing RORC rule was an extremely innovative boat for her times: 13.5 mt. l.o.a. (12.2 mt.  floating length) very lightweight (4 tonnes displacement), narrow-beamed (2.75 mt.) with sloping ends, dreadnought bow, thoroughly round sections, separate fin-keel and hanging rudder. Originally Cutter-rigged, albeit mainly sailed as Sloop. She immediately proved very fast, winning – notwithstanding a punishing RORC rating – several major regattas in the Adriatic Sea, occasionally establishing race-speed records. However, with the single exception of one entry in the 1971 Malta Middle Sea Race, she never competed in other marine areas, possibly more significant for competitive sailing, due to lack of available time and/or extended interest on the part of the original owners.

In 1992, after a few years in which the boat had not been utilized by the then aging owners, Strale was bought by four members of her original students’ crew, who had her completely renovated, scrupulously keeping to the original design. Ever since, she has been a regular entry in the major vintage boats regattas in the Mediterranean, winning several awards in the Classic Boat category (yachts launched between 1954 and 1974). These have included the l’Argentario Sailing Week Panerai Classic and the Mahon – Porto Rotondo race, together with second places in the Copa del Rey and in the overall classification of the Comite’ International de la Mediterranee – Panerai Classic Yacth Challenge for the year 2006. Back in the Adriatic, Strale has repeatedly won the City of Trieste Trophy and completed on several occasion the famous yearly Barcolana regatta (largest sailboat open race in the world, scoring close to 2000 entries) as first classified vintage boat.

Brest: the world’s largest maritime festival in photographs by Nigel Pert & Dan Houston with a … END_OF_DOCUMENT_TOKEN_TO_BE_REPLACED