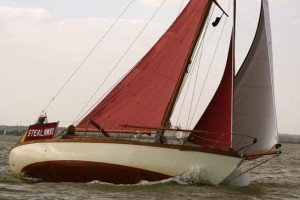 Stealaway has been on the East Coast since John Corbett Stark bought her in 1961 from Andrew Ripley who had kept her on the Hamble. John kept her at Maylandsea on the Blackwater as did her next owner Terence Bone between 1969 and 1974. Richard Oxley then owned her between 1974 and 1976 and kept her at West Mersea. He sold her to Peter and Joy Allen who kept her at Benfleet from 1976 until 1996 during which period they carried out a very thorough refit and upgrade below decks. In 1996 they sold Stealaway to Trevor Arnold who subsequently kept her at  Waldringfield on the Deben.

In April 2000 Ann and Martin Pearsons bought Stealaway through Peter Temple Marine Brokers at the Tide Mill in Woodbridge.  Martin Pearsons writes ‘In September 2000 we brought her back to West Mersea where we are members of WMYC.’

Brest: the world’s largest maritime festival in photographs by Nigel Pert & Dan Houston with a … END_OF_DOCUMENT_TOKEN_TO_BE_REPLACED