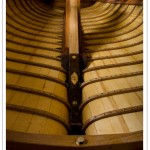 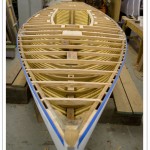 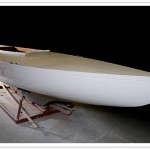 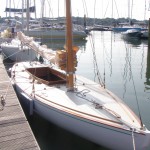 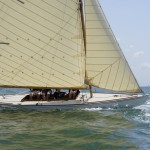 ‘St patrick’, is one of four identical yachts designed by GL Watson & Co. to the Boat Racing Assocation 18ft Class and built by William Fife in 1919.   These were the first racing yachts to be ordered after the First World War and were named after the UK’s patron saints. ‘St Patrick’ has been restored by Fairlie Restorations alongside GL Watson & Co.

The “Saints” were commissioned by Capt. L. Lindsay-Smith for the Royal Salcombe Yacht Club. After only a year at Salcombe and a further 3 years on the South Coast, all four boats were purchased by the Royal Norfolk & Suffolk Yacht Club where they were based until 1930.   After being sold by the RN&SYC from Gt. Yarmouth, St Patrick went to the River Deben where she changed owners twice and later went to Brightlingsea before dropping out of Lloyds Register for Yachts in 1952.

Having been raced and cruised on Loch Ryan, Patrick has subsequently been retrieved by G.L. Watson after she was found to be on the Isle of Whithorn in Dumfries & Galloway. It is estimated that the boat had been immobile in a garden there for 20-25 years since her last owner took her on.

G.L. Watson & Co. and Fairlie Restorations have undertaken a full and authentic restoration of the yacht, returning her to full sailing order.

All fastenings were in need of replacement and a large percentage of wood replaced. However, as much original material as practicable has been retained and a policy of like for like has been employed.   Original fittings have been re-used where possible throughout the yacht and replica metalwork has been as authentic as possible, in keeping with the period and aesthetics of the class.   Deck fittings have been nickel plated as indicated by the many original fittings found with the boat. The canvassed white pine decks have also been replaced like for like as indicated by the original. Traditional canvassing methods and solutions have been employed again to ensure authenticity.

St Patrick was re-launched on 30 June 2011 at Fairlie Restorations, Port Hamble. With freshly painted canvas decks, gleaming paint and varnish work and immaculate nickel plated metalwork, St Patrick is now back to her original 1919 G. L. Watson & Co. design. Complete with traditional Ratsey & Lapthorn sails, St Patrick will be sailing again in early July on the Solent before heading to the Clyde which will become her new home.

Brest: the world’s largest maritime festival in photographs by Nigel Pert & Dan Houston with a … END_OF_DOCUMENT_TOKEN_TO_BE_REPLACED