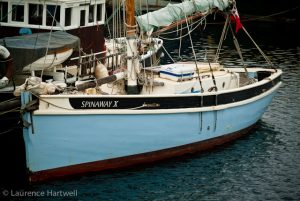 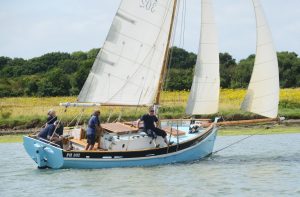 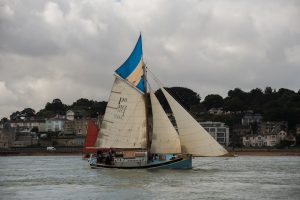 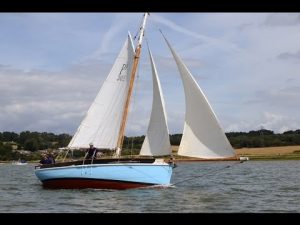 ‘Spinaway X’ was first registered in Plymouth in 1891 as PH 302. She is an early example of a Plymouth Hooker. She fished out of Polperro and other West Country ports until 1949 when she was sold as a yacht for the sum of £185, a Willy’s jeep (Teg. FDv 64) and a book of petrol coupons.

In 1979 Jim Curry refitted her including full decking, replacing parts of the keel, the stem and some replanking, tripling some frames and building a coachroof. Research at that time included a conversation with a 92 year old gent who remembered fishing on Spinaway in his youth. He had a fragile photograph of her and he quoted her as being the fastest piece of wood out of Polperro.

In 1996 Dave Blinkhorn interviewed JC Heal’s son Philip and got some of the above information. He described her as a Looe Lugger. As a yacht she has spent time in the Irish Sea, and in Dave and Anna Blinkhorn’s ownership sailed via Scotland, East Coast and the French Canals to the Mediterranean, ending up in Spain. She sailed back to the West Country in 2004.

In 2016, Bob Aylott went sailing with her owners Andrew and Angela Hitt and crew Mike and Brian on the River Medina.

Brest: the world’s largest maritime festival in photographs by Nigel Pert & Dan Houston with a … END_OF_DOCUMENT_TOKEN_TO_BE_REPLACED